Raising the Minimum Wage Would Be the Best Black Friday Deal

This story was originally published on November 27, 2013.

Black Friday is a good time to reflect on the need for better minimum wages.

Both Walmart and McDonalds have come under fiÂ­re for practices that acknowledge their employees are struggling financiallyâ€”yet the companies have made no move to pay their workers a livable wage. In November 2013, a Walmart in Ohio had bins that let employees donate food to other employees so they could eat on Thanksgiving. A McDonalds website that gives tips to its employees recommended that they sell holiday gifts to make quick cash, cut their food into smaller portions so they feel like theyâ€™ve eaten more, apply for food stamps, get a second job, and to â€œStop complaining. Stress hormones rise by 15 percent after 10 minutes of complaining.â€�

The concept these companies are reinforcing with these helpful tips is one that has political traction: that minimum-wage workers earn a decent living, they just need to spend their money better and change their lifestyles. Theyâ€™re still expected to pull themselves by their bootstraps, but without actually getting paid enough by their employers. When the workers can’t make ends meet, the employers arenâ€™t accountable.

When this messaging leaks out to the general public, it makes immediately clear the problems with the lowest-paid Americans are expected to get by on with less purchasing power than people had in the â€™60s.  Not everyoneâ€™s willing to dig into the finer points of minimum wage laws, but when you see a photo of a company that profits $17 billion annually running a food drive for its own employees, itâ€™s immediately clear that something is wrong with this picture. Income in America is not an equal playing fieldâ€”two-thirds of minimum wage earners are women and 42 percent are people of color. 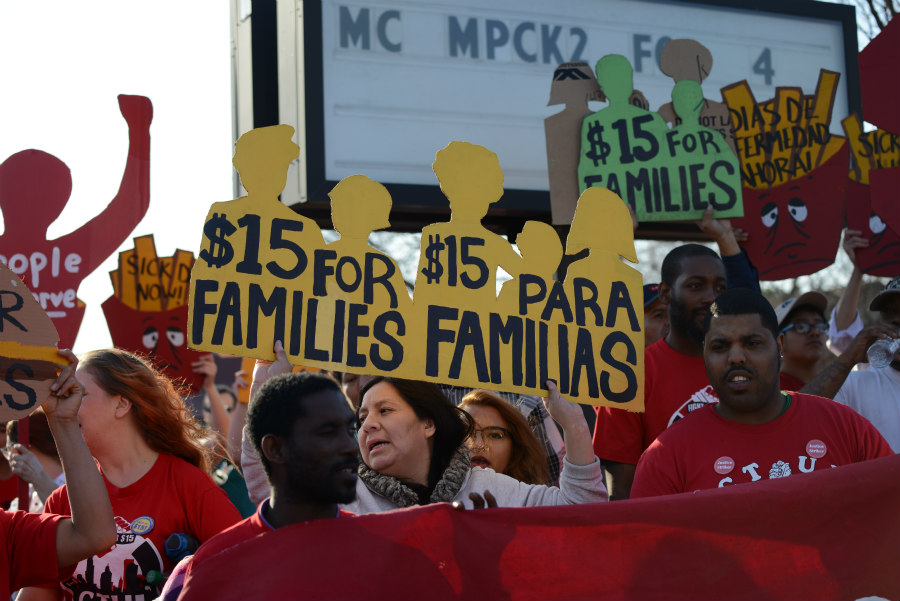 Activism on minimum wage and labor issues seems to be coming to a head this Black Friday, as the big box giants plan on starting the shopping day at 6 p.m. on Thanksgivingâ€”pushing us to combine a holiday of being thankful for all that we have with a spending spree. In response, Black Friday protests happened in over 1,500 Walmart locations in 2013, though itâ€™s unclear whether they actually affected Walmartâ€™s bottom line. Whether or not they actually impact Walmartâ€™s profits, the protests contribute to a growing public understanding that many major employers are keeping their workers at wages that make it impossible to make ends meet without public assistance.

These actions come at a time when there is actually momentum at a federal level to change minimum wage laws. The current federal minimum wage is $7.25 per hour. If you work full-time, that pencils out to $15,000 a year. If the minimum wage had kept up with inflation and the cost of living, it would currently be over $10 an hour. Meanwhile, the wage for tipped workers is an astounding $2.13 per hour and it hasnâ€™t been raised in 20 years.

Former President Obama endorsed a $10.10 an hour minimum wage, but no law passed. The Fair Minimum Wage Act of 2013 would raise the federal minimum wage to $10.10 per hour over the next two years and adjust it to keep pace with cost of living. It would also raise the minimum wage for tipped workers to 70 percent of minimum wage. This legislation would cause $32.6 billion in economic growth. Now that sounds like a real bargain.