In tech circles, it would be easy to assume that the world of high-impact charitable giving is a rich manâ€™s game where deals are inked at exclusive black tie galas over fancy hors dâ€™oeuvre.Â Both Mark Zuckerberg and Marc Benioff have donated to SF hospitals that now bear their names. Gordon Moore has given away $5B â€“ including $600M to Caltech â€“ which was the largest donation to a university at the time. And of course, Bill Gates has already donated $27B to every cause imaginable (and co-founded The Giving Pledge, a consortium of billionaires pledging to donate most of their net worth to charity by the end of their lifetime.)

For Bill, that means he has about $90B left to give.

For the average working American, this world of concierge giving is out of reach, both in check size, and the army of consultants, lawyers and PR strategists that come with it. It seems that in order to do good, you must first do well. Very well.

Bright FundsÂ is looking to change that. Founded in 2012, this SF-based startup is looking to democratize concierge giving to every individual so they â€œcan give with the same effectiveness as Bill and Melinda Gates.â€� They are doing to philanthropy what Vanguard and Wealthfront have done for asset management for retail investors.

In particular, they are looking to unlock dollars from the underutilized corporate benefit of matching funds for donations, which according to Bright Funds is offered by over 60% of medium to large enterprises, but only used by 13% of employeesÂ at these companies. The need for such a service is clear â€” these programs are cumbersome, transactional, and often offline. Make a donation, submit a receipt, and wait for it to churn through the bureaucratic machine of accounting and finance before matching funds show up weeks later.

Bright Funds is looking to make your companyâ€™s matching funds benefit as accessible and important to you as your free lunches or massages. Plus, Bright Funds charges companies per seat, along with a transaction fee to cover the cost of payment processing, sparing employees any expense.

Itâ€™s a model that is working. According to Bright Fundâ€™s CEO Ty Walrod, Bright Funds customers see on average a 40% year-over-year increase in funds donated through the platform. More importantly, Bright Funds not only transforms an employeeâ€™s relationship to personal philanthropy, but also to the company they work for.

This model of bottoms-up giving is a welcome change from the big foundation model which has recently been rocked by scandal. The Silicon Valley Community FoundationÂ was the go-to foundation for The Whoâ€™s Who of Silicon Valley elite. It rode the latest tech boom to become the largest community foundation in eleven short years with generous stock donations from donors like Mark Zuckerberg ($1.8 billion), GoProâ€™s Nicholas Woodman ($500 million), and WhatsApp co-founder Jan Koum ($566 million). Today, at $13.5 billion, it surpasses the 80+ year old Ford Foundation in endowment size.

However, earlier this year, their star fundraiser Mari Ellen LoijensÂ (credited with raising $8.3B of the $13.5B) was accused of repeatedly bullying and sexually harassing coworkers, allegations that the Foundation had â€œknown about for yearsâ€� but failed to act upon. In 2017, a similar case occurred when USCâ€™s star fundraiser David CarreraÂ  stepped down on charges of sexual harassment after leading the universityâ€™s historic $6 billion fundraising campaign.

While large foundations and endowments do important work, their structure relies too much on whale hunting for big checks, giving an inordinate amount of power to the hands of a small group of talented fund raisers.

This stands in contrast to Bright Fundsâ€™ ethos â€” to lead a grassroots movement in empowering individual employees to make their dollar of giving count.

Bright Funds is the latest iteration of a lineup of workplace giving platforms. MicroEdgeÂ and CybergrantsÂ paved the way in the 80s and 90s by digitizing the giving experience, but was mainly on-premise, and lacked a focus on user experience. Benevity and YourCause arrived in 2007 to bring workplace giving to the cloud, but they were still not turnkey solutions that could be easily implemented.

Bright Funds started as a consumer platform, and has retained that heritage in its approach to product design, aiming to reduce friction for both employee and company adoption. This is why many of their first customers were midsized tech startups with limited resources and looking for a turnkey solution, including Eventbrite, Box, Github, and Contently . They are now finding their way upmarket into larger, more established enterprises like Cisco, VMWare, Campbellâ€™s Soup Company, and Sunpower.

Bright Funds approach to product has brought a number of innovations to this space.

The first is the concept of a cause-focused â€œfund.â€� Similar to a mutual fund or ETF, these funds are portfolios of nonprofits curated by subject-matter experts tailored to a specific cause area (e.g. conservation, education, poverty, etc.). This solves one of the chief concerns of any donor â€” is my dollar being put to good use towards the causes I care about? Passionate about conservation? Invest with Jim Leape from the Stanford Woods Institute for the Environment, who brings over three decades of conservation experience in choosing the six nonprofits in Bright Fundâ€™s conservation portfolio. This same expertise is available across a number of cause areas.

Additionally, funds can also be created by companies or employees. This has proven to be an important rallying point for emergency relief during natural disasters, where employees at companies can collectively assemble a list of nonprofits to donate to. In 2017, Cisco employees donated $1.8 million (including company matching) through Bright Funds to Hurricanes Harvey, Maria, and Irma as well as the central Mexico earthquakes, the current flooding in India and many more.

The second key feature of their product is the impact timeline, a central news feed to understand where your dollars are going across all your cause areas. This transforms giving from a black box transaction to an ongoing dialogue between you and your charities.

Lastly, Bright Funds wants to take away all the administrative burden that might come with giving and volunteering — everything from tracking your volunteer opportunities and hours, to one-click tax reporting across all your charitable donations. In short, no more shoeboxes of receipts to process through in April.

Although Bright Funds is focused on transforming the individual giving experience, itâ€™s paying customer at the end of the day is the enterprise.

And although it is philanthropic in nature, Bright Funds is not exempt from the procurement gauntlet that every enterprise software startup faces â€” whatâ€™s in it for the customer? What impact does workplace giving and volunteering have on culture and the bottom line?

To this end, there is evidence to show that corporate social responsibility has a an impact on recruiting the next generation of workers. A study by Horizon MediaÂ found that 81% of millennials expect their companies to be good corporate citizens. A separate 2015 studyÂ found that 62% of millennials said theyâ€™d take a pay cut to work for a company thatâ€™s socially responsible.

Box, one of Bright Fundâ€™s early customers, has seen this impact on recruiting firsthand (disclosure: Box is one of my former employers). Like most tech companies competing for talent in the Valley, Box used to give out lucrative bonuses for candidate referrals. They recently switched to giving out $500 in Bright Funds gift credit. Instead of seeing employee referrals dip, Box saw referrals â€œskyrocket,â€� according to Box.org Executive Director Bryan Breckenridge. This program has now become â€œone of the most cherished cultural traditions at Box,â€� he said.

Additionally, like any corporate benefit, there should be metrics tied to employee retention. Benevity released a studyÂ of 2 million employees across 118 companies on their platform that showed a 57% reduction in turnover for employees engaged in corporate giving or volunteering efforts. VMware, one of Bright Fundâ€™s customers, has seen an astonishing 82% of their 22,000 employees participate in their Citizen Philanthropy program of giving and volunteering, according to VMware Foundation Director Jessa Chin. Their full-time voluntary turnover rate (8%)Â is well below the software industry average of 13.2%. 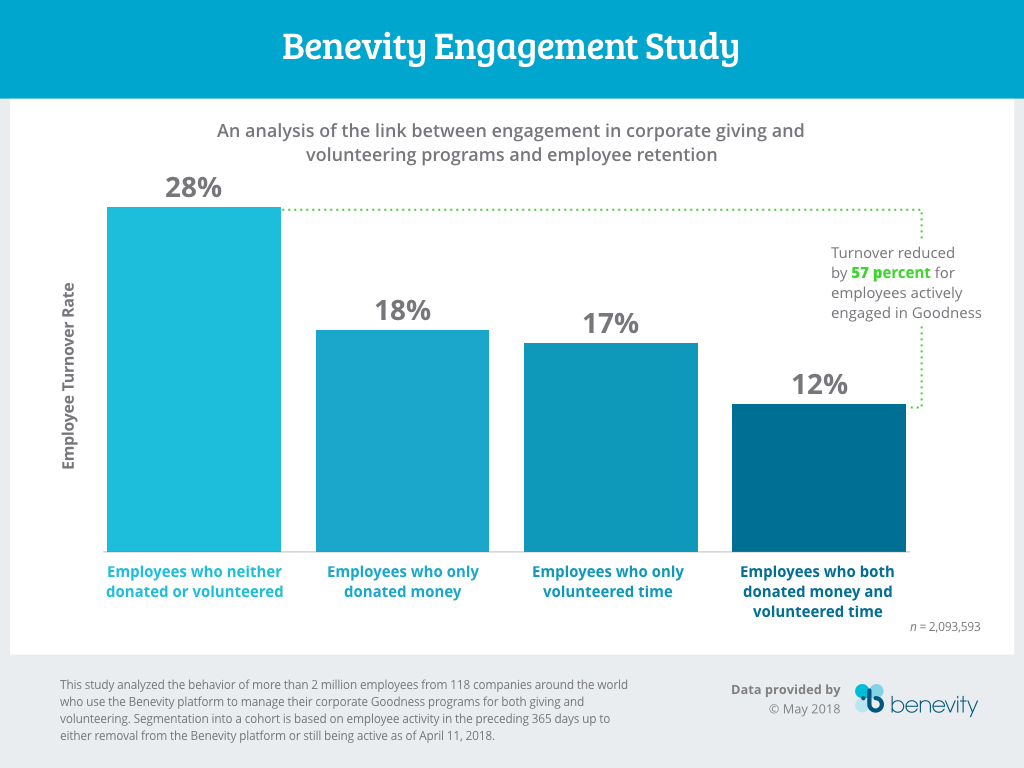 Towards a Brighter Future

Bright Funds still has a lot of work to do. CEO Walrod says that one of his top priorities is to expand the platform beyond US charities, finding ways to evaluate and incorporate international nonprofits.

They have also not given up their dream of becoming a truly consumer platform, perhaps one day competing in the world of donor-advised funds, which today is largely dominated by big names like Fidelity and Schwab who house over $85B of assets. In the short term, Walrod wants to make every Bright Funds account similar to a 401K account. It goes wherever you work, and is a lasting record of the causes you care about, and the time and resources youâ€™ve invested in them.

Whether the impetus is altruism around giving or something more utilitarian like retention, companies are increasingly realizing that their employees represent a charitable force that can be harnessed for the greater good. Bright Funds has more work to do like any startup, but it is empowering the next set of donors who can give with the same effectiveness as Gates, and one day, at the same scale as him as well.