The team at inVia Robotics didn’t start out looking to build a business that would create a new kind of model for selling robotics to the masses, but that may be exactly what they’ve done.

After their graduation from the University of Southern California’s robotics program, Lior Alazary, Dan Parks, and Randolph Voorhies, were casting around for ideas that could get traction quickly.

“Our goal was to get something up and running that could make economic sense immediately,’ Voorhies, the company’s chief technology officer, said in an interview.

The key was to learn from the lessons of what the team had seen as the missteps of past robotics manufacturers.

Despite the early success of iRobot, consumer facing or collaborative robots that could operate alongside people had yet to gain traction in wider markets.

Willow Garage, the legendary company formed by some of the top names in the robotics industry had shuttered just as Voorhies and his compatriots were graduating, and Boston Dynamics, another of the biggest names in robotics research, was bought by Google around the same time — capping an six-month buying spree that saw the search giant acquire eight robotics companies.

“In the midst of all this we were looking around and we said, ‘God there were a lot of failed robotics companies!’ and we asked ourselves why did that happen?” Voorhies recalled.Â “A lot of the hardware companies that weâ€™d seen, their plan was: step one build a really cool robot and step three: an app ecosystem will evolve and people will write apps and the robot will sell like crazy. And nobody had realized how to do step 2, which was commercialize the robot.”

So the three co-founders looked for ideas they could take to market quickly.

The thought was building a robot that could help with mobility and reaching for objects. “We built a six-degree-of-freedom arm with a mobile base,” Voorhies said.

However, the arm was tricky to build, components were expensive and there were too many variables in the environment for things to go wrong with the robot’s operations.Â Ultimately the team at inVia realized that the big successes in robotics were happening in controlled environments.Â

“We very quickly realized that the environment is too unpredictable and there were too many different kinds of things that we needed to do,” he said.Â

Parks then put together a white paper analyzing the different controlled environments where collaborative robots could be most easily deployed. The warehouse was the obvious choice.

Back in March of 2012 Amazon had come to the same conclusion and acquired Kiva Systems in a $775 million deal that brought Kiva’s army of robots to Amazon warehouses and distributionÂ centersÂ around the world.

“Dan put a white paper together for Lior and I,” Voorhies said, “and the thing really stuck out was eCommerce logistics. Floors tend to be concrete slabs; they’re very flat with very little grade, and in general people are picking things off a shelf and putting them somewhere else.”

With the idea in place, the team, which included technologists Voorhies and Parks, and Lazary, a serial entrepreneur who had already exited from two businesses, just needed to get a working prototype together.

Most warehouses and shipping facilities that weren’t Amazon were using automated storage and retrieval systems, Voorhies said. These big, automated systems that looked and worked like massive vending machines. But those systems, he said, involved a lot of sunk costs, and weren’t flexible or adaptable.

And those old systems weren’t built for random access patterns and multi-use orders which comprise most of the shipping and packing that are done as eCommerce takes off.

With those sunk costs though, warehouses are reluctant to change the model. The innovation that Voorhies and his team came up with, was that the logistics providers wouldn’t have to.

“We didnâ€™t like the upfront investment, not just to install one but just to start a company to build those things,” said Voorhies. “We wanted something we could bootstrap ourselves and grow very organically and just see wins very very quickly. So we looked at those ASRS systems and said why donâ€™t we build mobile robots to do this.”

In the beginning, the team at inVia played with different ways to build the robot.l first there was a robot that could carry several different objects and another that would be responsible for picking.

The form factor that the company eventually decided on was a movable puck shaped base with a scissor lift that can move a platform up and down. Attached to the back of the platform is a robotic arm that can extend forward and backward and has a suction pump attached to its end. The suction pump drags boxes onto a platform that are then taken to a pick and pack employee.

“We were originally going to grab individual product.s. Once we started talking to real warehouses more and more we realized that everyone stores everything in these boxes anyway,” said Voorhies. “And we said why donâ€™t we make our lives way easier, why donâ€™t we just grab those totes?”Â

Since bootstrapping that initial robot, inVia has gone on to raise $29 million in financing to support its vision. Most recently with a $20 million round which closed in July. 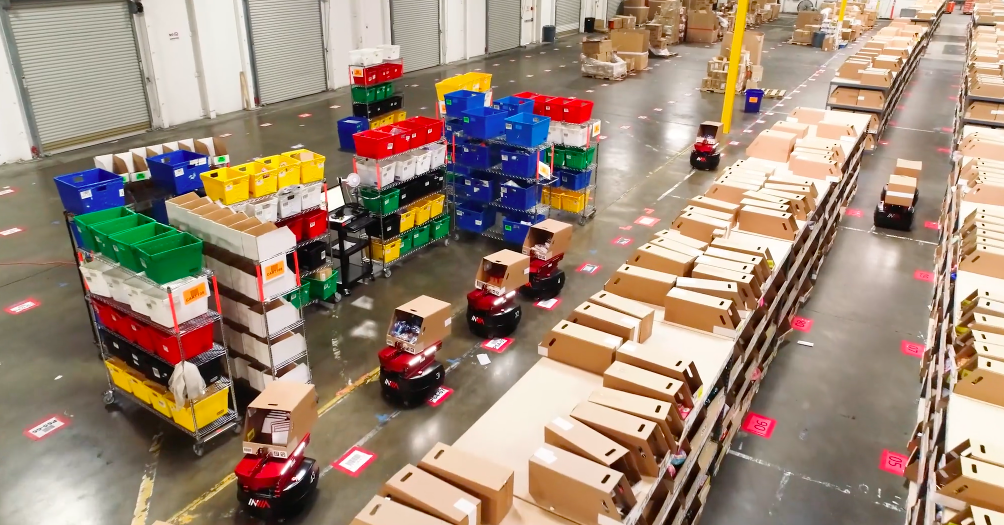 “E-commerce industry growth is driving the need for more warehouse automation to fulfill demand, and AI-driven robots can deliver that automation with the flexibility to scale across varied workflows. Our investment in inVia Robotics reflects our conviction in AI as a key enabler for the supply chain industry,” saidÂ Daniel Gwak, Co-Head, AI Investments at Point72 Ventures, the early stage investment firm formed by the famed hedge fund manager, Steven Cohen.

Given the pressures on shipping and logistics companies, it’s no surprise that the robotics and automation are becoming critically important strategic investments, or that venture capital is flooding int the market. In the past two months alone, robotics companies targeting warehouse and retail automation have raised nearly $70 million in new financing. They include the recentÂ raised $17.7 millionÂ for the French startup Exotec Solutions and Bossa Nova’s $29 million round forÂ its grocery store robots.

Then there are warehouse-focused robotics companies like Fetch Robotics, which traces its lineage back to Willow Garage and Locus Robotics, which is linked to the logistics services company Quiet Logistics.

“Funding in robotics has been incredible over the past several years, and for good reason,” said John Santagate, Research Director for Commercial Service Robotics at Research and Analysis Firm IDC, in a statement. “The growth in funding is a function of a market that has become accepting of the technology, a technology area that has matured to meet market demands, and vision of the future that must include flexible automation technology. Products must move faster and more efficiently through the warehouse today to keep up with consumer demand and autonomous mobile robots offer a cost-effective way to deploy automation to enable speed, efficiency, and flexibility.” 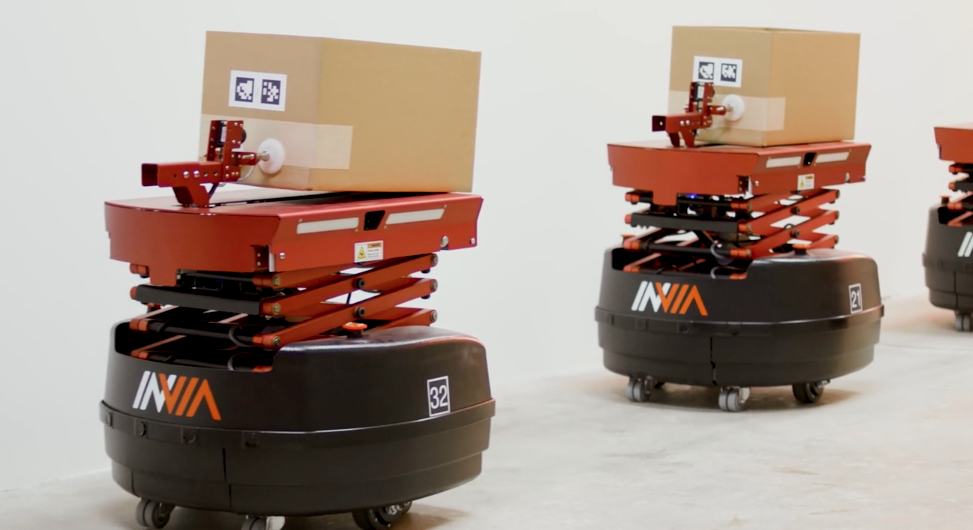 The team at inVia realized it wasn’t enough to sell the robots. To give warehouses a full sense of the potential cost savings they could have with inVia’s robots, they’d need to take a page from the software playbook. Rather than selling the equipment, they’d sell the work the robots were doing as a service.

“Customers will ask us how much the robots cost and thatâ€™s sort of irrelevant,” says Voorhies. “We donâ€™t want customers to think about those things at all.”

Contracts between inVia and logistics companies are based on the unit of work done, Voorhies said. “We charge on the order line,” says Voorhies. “An order line is a single [stock keeping unit] that somebody would order regardless of quantity… We’re essentially charging them every time a robot has to bring a tote and present it in front of a person. The faster we’re able to do that and the less robots we can use to present an item the better our margins are.”

It may not sound like a huge change, but those kinds of efficiencies matter in warehouses, Voorhies said. “If you’re a person pushing a cart in a warehouse that cart can have 35 pallets on it. With us, that person is standing still, and they’re really not limited to a single cart. They are able to fill 70 orders at the same time rather than 55,” he said.

At Rakuten logistics, the deployment of inVia’s robots are already yielding returns, according to Michael Manzione, the chief executive officer of Rakuten Super Logistics.

“Really [robotics] being used in a fulfillment center is pretty new,” said Manzione in an interview. “We started looking at the product in late February and went live in late March.”

For Manzione, the big selling point was scaling the robots quickly, with no upfront cost. “The bottom line is ging to be effective when we see planning around the holiday season,” said Manzione. “We’re not planning on bringing in additional people, versus last year when we doubled our labor.”

As Voorhies notes, training a team to work effectively in a warehouse environment isn’t easy.

“The big problem is that itâ€™s really hard to hire extra people to do this. In a warehouse thereâ€™s a dedicated core team that really kicks ass and theyâ€™re really happy with those pickers and they will be happy with what they get from whatever those people can sweat out in a shift,” Voorhies said. “Once you need to push your throughput beyond what your core team can do itâ€™s hard to find people who can do that job well.”Â