SalesforceÂ put the finishing touches onÂ a tower in San Francisco last year. In October, it announced Salesforce Tower in Atlanta. Today, it was Dublin’s turn. Everyone gets a tower.

Salesforce first opened an office in Dublin back in 2001, and has since expanded to 1,400 employees. Today’s announcement represents a significant commitment to expand even further, adding 1,500 new jobs over the next five years.

The new tower in Dublin is actually going to be a campus made up of four interconnecting buildings on the River Liffey. It will eventually encompass 430,000 square feet with the first employees expected to move into the new facility sometime in the middle of 2021. 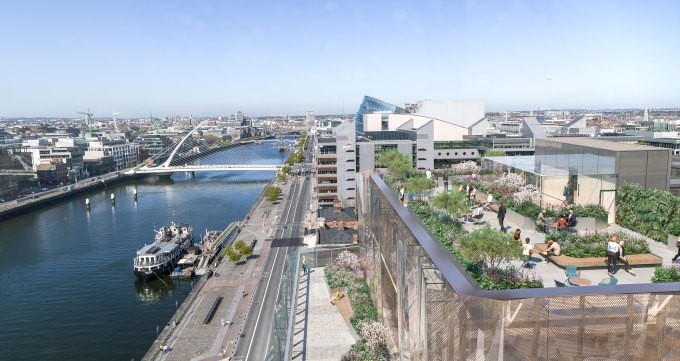 Martin Shanahan, who is CEO at IDA Ireland, the state agency responsible for attracting foreign investment in Ireland, called this one of the largest single jobs announcements in the 70-year history of his organization.

As with all things Salesforce, they will do this up big with an “immersive video lobby” and a hospitality space for Salesforce employees, customers and partners. This space, which will be known as the “Ohana Floor,” will also be available for use by nonprofits.They also plan to build paths along the river that will connect the campus to the city center. The company intends to make the project “one of the most sustainable building projects to-date” in Dublin, according to a statement announcing the project. What does that mean? It will, among other things, be a nearly Net Zero Energy building and it will use 100 percent renewable energy, including onsite solar panels.

Finally, as part of the company’s commitment to the local communities in which it operates, it announced a $1 million grant to Educate Together, an education nonprofit. The grant should help the organization expand its mission running equality-based schools. Salesforce has been supporting the group since 2009 with software grants, as well as a program where Salesforce employees volunteer at some of the organization’s schools.