Salesforce keeps rolling with another banner year in 2018

The good times kept on rolling this year for Salesforce with all of the requisite ingredients of a highly successful cloud company — the steady revenue growth, the expanding product set and the splashy acquisitions. The company also opened the doors of its shiny new headquarters, Salesforce Tower in San Francisco, a testament to its sheer economic power in the city.

Salesforce, which set a revenue goal of $10 billionÂ a few years ago is already on its way to $20 billion. Yet Salesforce is also proof you can be ruthlessly good at what you do, while trying to do the right thing as an organization.

Make no mistake, Marc Benioff and Keith Block, the company’s co-CEOs, want to make obscene amounts of money, going so far as to tell a group of analysts earlier this year that their goal by 2034 is to be a $60 billion company. Salesforce just wants to do it with a hint of compassion as it rakes in those big bucks and keeps well-heeled competitors like Microsoft, Oracle and SAP at bay.

A look at the numbers

In the end, a publicly traded company like Salesforce is going to be judged by how much money it makes, and Salesforce it turns out is pretty good at this, as it showed once again this year. The company grew every quarter by over 24 percent YoY and ended up the year with $12.53 billion in revenue. Based on its last quarter of $3.39 billion, the company finished the year on a $13.56 billion run rate. 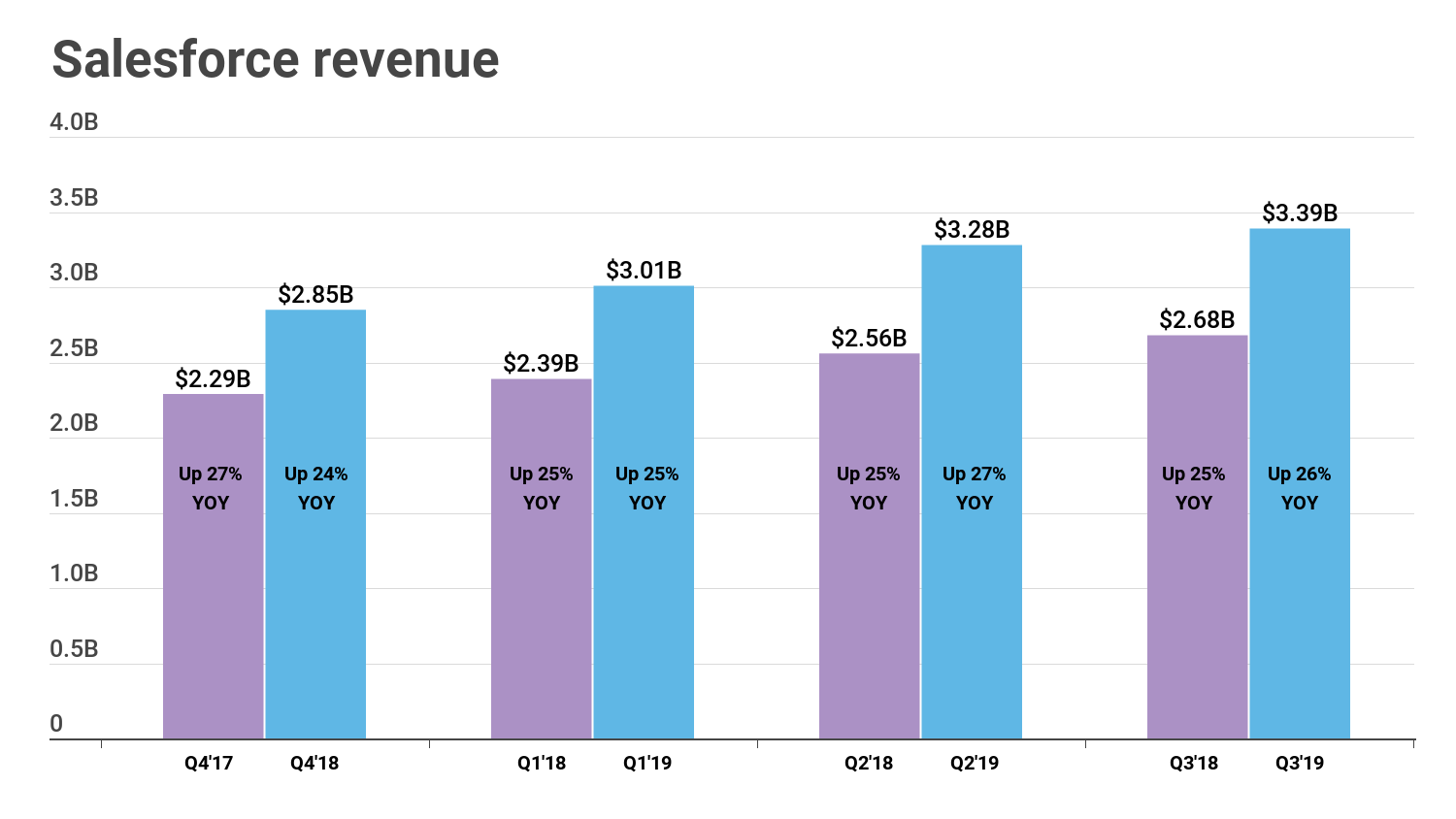 Even with this steady growth trajectory, it might be some time before it hits the $5 billion-a-quarter mark and checks off the $20 billion goal. Keep in mind that it took the company three years to get from $1.51 billion in Q12016 to $3.1 billion in Q12019.

As for the stock market,Â it has been highly volatile this year, but Salesforce is still up. Starting the year at $102.41, it was sitting at $124.06 as of publication, after peaking on October 1 at $159.86. The market has been on a wild ride since then and cloud stocks have taken a big hit, warranted or not. On one particularly bad day last month, Salesforce had its worst day since 2016 losing 8.7 percent in value,

When you make a lot of money you can afford to spend generously, and the company invested some of those big bucks when it bought Mulesoft for $6.5 billion in March, making it the most expensive acquisition it has ever made. With Mulesoft, the company had a missing link between data sitting on-prem in private data centers and Salesforce data in the cloud.

Mulesoft helps customers build access to data wherever it lives via APIs. That includes legacy data sitting in ancient data repositories. As Salesforce turns its eyes toward artificial intelligence and machine learning, it requires oodles of data and Mulesoft was worth opening up the wallet to provide the company with that kind of access to a variety of enterprise data.

But Mulesoft wasn’t the only thing Salesforce bought this year. It made five acquisitions in all. The other significant one came in July when it scooped up Dataorama for a cool $800 million, giving it a market intelligence platform.

What could be on board for 2019? If Salesforce sticks to its recent pattern of spending big one year, then regrouping the next, 2019 could be a slower one for acquisitions. Consider that it bought just one company last year after buying a dozen in 2016.

One other way to keep revenue rolling in comes from high-profile partnerships. In the past, Salesforce has partnered with Microsoft and Google, and this year it announced that it was teaming up with Apple. Salesforce also announced another high-profile arrangement with AWS to share data between the two platforms more easily. The hope with these types of cross pollination is that the companies can both increase their business. For Salesforce, that means using these partnerships as a platform to move the revenue needle faster.

Even while his company has made big bucks, Benioff has been preaching compassionate capitalism using Twitter and the media as his soap box.

He went on record throughout this yearÂ supporting Prop C, a referendum question designed to help battle San Francisco’s massive homeless problem by taxing companies with greater than $50 million in revenue — companies like Salesforce. Benioff was a vocal proponent of the idea, and it won. He did not find kindred spirits among some of his fellow San Francisco tech CEOs, openly debating Twitter CEO Jack Dorsey on Twitter.

Speaking about Prop C in an interview with Kara Swisher of Recode in November, Benioff talked in lofty terms about why he believed in the measure even though it would cost his company money.

“You’ve got to really be mindful and think about what it is that you want your company to be for and what you’re doing with your business and here at Salesforce, that’s very important to us,” he told Swisher in the interview.

He also talked about how employees at other tech companies were driving their CEOs to change their tune around social issues, including supporting Prop C, but Benioff had to deal with his own internal insurrection this year when 650 employees signed a petition asking him to rethink Salesforce’s contract with theÂ U.S. Customs and Border Protection (CBP) in light of the current administration’s border policies. Benioff defended the contract, stating that that Salesforce tools were being used internally at CBP for staff recruiting and communication and not to enforce border policy.

Regardless, Salesforce has never lost its focus on meeting lofty revenue goals, and as we approach the new year, there is no reason to think that will change. The company will continue to look for new ways to expand markets and keep their revenue moving ever closer to that $20 billion goal, even as it continues to meld its unique form of compassion and capitalism.

Over One Million US Gun Owners Say F*ck You to New Jersey Politicians JUDICIAL WATCH: How Obama & Hillary Clinton Influenced the Ongoing Crisis in Syria