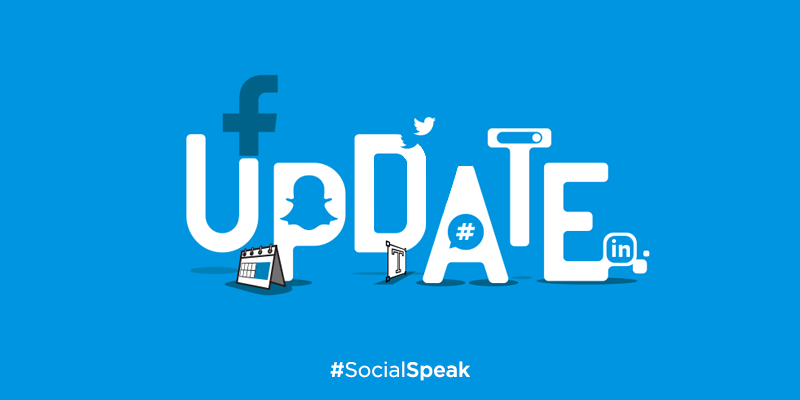 Updates are never ending in the social media world.

Snapchat never gives up on staying up to date, Twitter and LinkedIn adding features, and Facebook is working on gaining usersâ€™ trust back.

Whatâ€™s new for this week? Here is what you need to know.

Ever sent the wrong message to the wrong person? Snapchat is giving second chances!

Snapchat introduced a new feature this week that finally allows you to delete messages youâ€™ve sent before being read by the other party.

Text messages sent to your contacts on Snapchat used to remain in the log until both parties view the chat. There was an option to clear the chat, but not a single message.

However, now you can delete a message even before it is viewed, which is useful if you sent one accidently or have regrets about what you sent. Here’s what you do:

Twitter has just launched a new feature, allowing users to â€˜bookmarkâ€™ tweets they want to save for later. Whether it is something historic you have seen, a joke you donâ€™t want to forget or an article you want to read later, you can now save it with twitter bookmarks and coma back to it whenever you want. Only you can view your bookmarks.

Theyâ€™ve also rolled out a new share function which allows users to DM tweets to others and share tweets by email or text privately in addition to the existing mention feature.

Time is up for Facebookâ€™s Trending section

It may be harder yet to get your news from Facebook. The social media giant is continuing its efforts to cut down on the potential for fake news and the possibility of bias and is removing its Trending Topics section next week. â€œWeâ€™re removing Trending soon to make way for future news experiences on Facebook,â€� Alex Hardiman, head of Facebook News Products, wrote in a blogpost. So begin saying your goodbyes now.

LinkedIn “How You Matchâ€� updates, and more

In theÂ announcement for the newÂ How You MatchÂ feature, LinkedIn says “knowing whether or not youâ€™re a good fit for a role is one of the most challenging parts of the job hunt.” How You Match aims to make this easier by comparing your LinkedIn profile factors (such as education level, skills, years of experience, and current job title) to what a company says itâ€™s looking for in a potential new hire.

You can nowÂ follow hashtagsÂ to further customise our LinkedIn newsfeed. This is the second hashtag update in as many months, so now’s a good time to take another look at your LinkedIn hashtag strategy. Add to that, LinkedIn will no longerÂ share changesÂ to past positions with your network.

Stay tuned to #SocialSpeak for more on the latestÂ socialÂ media trends, and for the inside scoop on whatâ€™s happening in 2018.

Google Pixel 3 and 3 XL: Release Date, Price and Specifications 27 Best GoPro Accessories 2018 for All Your Adventures