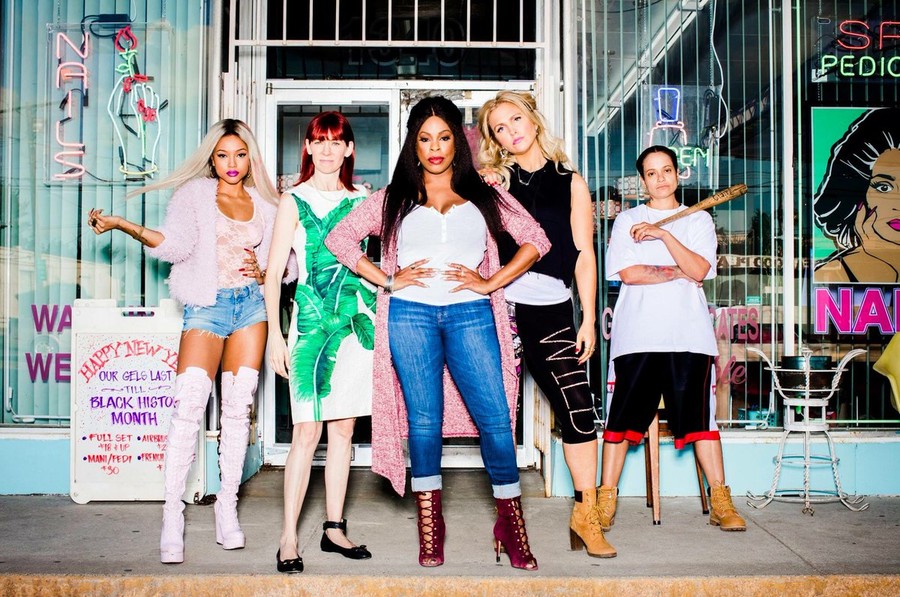 This piece contains spoilers for the second season of Claws.

From the viral account of fake heiress Anna Delvey to the success of Oceanâ€™s 8 and the hit shows Dietland and Claws, summer 2018 has proven to be the season of female scammers. Sure, weâ€™ve seen women lie, cheat, and steal before, but never so many all at once. This sudden windfall of shady ladiesâ€”as well as the critics, readers, and viewers who canâ€™t get enough of themâ€”suggests that when it comes to stories of female villains, weâ€™re ready to go all in.

Grifting, in both real life and fiction, has traditionally been the realm of men, with mob fixes and white-collar racket dominating the collective cultural imagination from the street to the corner office, to the White House. Thereâ€™s no question that enterprising women con artists have worked this benevolent sexism to their own advantage and, in the process, revealed the fragility of male-dominated systems of economic, social, and political power. For just one example, in 1902, a young woman named Cassie Chadwick, claiming to be Andrew Carnegieâ€™s heir, defrauded banks out of millions of dollars, earning her the title â€œhigh priestess of fraudulent finance.â€� But a time of revelations around the highest level of deceit (President Trumpâ€™s ties to Russian interference in the 2016 election) is also a time when women grifters, con artists, scammers, and flimflammers have managed to grab their own media spotlights.

The summer of swindles kicked off with New York magazineâ€™s meaty exposÃ© of Anna Delvey, a German-born New York scenester who fleeced friends, acquaintances, and banks for their cash as she convinced art-world elites to buy into her schemes. Though Delvey worked alone, the revelations about her seemed to set off a domino effect of female con artists. Yvonne Bannigan, a former assistant to legendary Vogue Creative Director Grace Coddington, used her bossâ€™s credit card to rack up more than $50,000 in purchases. In Hollywood, a mysterious woman claimed to be various high-powered female producers over the phone to catfish lower-level industry professionals into projects requiring thousands in upfront expenses. And, most recently, a young Russian gun activist named Maria Butina was outed as a foreign agent who used the National Rifle Association to cultivate GOP politicians while advancing Russian interests.

The womenâ€™s backgrounds and cover storiesâ€”the social climber (Delvey), fashion-world striver (Bannigan), graduate student (Butina)â€”donâ€™t fit a stereotypical criminal profile, and thatâ€™s a large part of why their cons were successful. And yet few of the media outlets that covered them used the phrase â€œcriminalâ€� to describe their illicit activity. Calling them grifters, scammers, frauds, and con artists foregrounds the breathless drama of their stunts while dissociating them from the illegality of those actions.

2018â€™s summer crooks share other important commonalities. Their whiteness is inextricable from their ploys, a fact thatâ€™s been glossed over in coverage. Thereâ€™s no question that both their outsized scams and the media attention would look very different had those schemes not leveraged racial and class privilege. And each of them constructed frauds built on the currency of social and political connections: access to big names, deep pockets, and people who know people. The rarefied worlds they inhabitedâ€”art, fashion, movie production, politicsâ€”have always been backdrops for intrigue and double-dealing, making the stories of how they committed felonies seem far more interesting than the crimes themselves. Itâ€™s not surprising that Delvey, for one, is reportedly excited about joining a list of swindlers whose heists are adapted for the silver screen; Shonda Rhimes is currently developing a Netflix series based on the New York article.

The damage caused by the likes of Delvey has been secondary to their admittedly fascinating grifts, but one of their fictional counterparts in this summer of scamming puts questions of morality at the center of its plot. TNTâ€™s Claws, a show about a group of Florida nail artisans who turn to money laundering to build their business, isnâ€™t only about looking good while scamming, but also about what leads someone to break the law. Desna Simms (Niecy Nash) and her crew of estheticians are coerced into cleaning money through a pain-medicine clinic run by the Dixie Mafia, a white and male-dominated gang distinct from the ethnically diverse women of Nail Artisan salon.

It’s not clear that, in a less corrupt world, these nail artists would choose a life of grifting: Their mob entanglements come about through various romantic relationships, and they worry about their complicity in  supporting the opioid epidemic. That said, the showâ€™s second season finds the women in charge of the growing laundering enterprise with the arrival of crime boss Zlata Ostrovsky (Franka Potente), whose book, Kremlin Konnection, she bills as â€œthe Russian answer to Lean In by Sheryl Sandberg.â€�

As a Black woman raised in an abusive foster-care systemâ€”and who’s therefore well aware that power is both corruptible and tenuousâ€”Desna grapples with her illegal work and its ramifications more than most grifters. And, unlike the real-world scammers who used their jobs as fronts and their colleagues as marks, Desnaâ€™s work is her home, the salon a center of acceptance and community, and her skill a source of pride.

In a summer of female scammers, both Dietland and Claws stand out for exploring the motivations of their protagonists.

With female cons, aesthetics are central to understanding how they disguise their true intentions: Foreign operative Butinaâ€™s youth and her long, bright-red hair made her stand out in rooms full of pale, male conservatives, and surely facilitated the sexual relationships that allegedly gave her access to the NRA. And while she wore the kind of plain, almost ugly clothing that only the fashionable and wealthy can pull off, Anna Delveyâ€™s one tell was her unkempt locks. On the fictional end, the Oceanâ€™s 8 capers were able to steal millions of dollars of jewelry by exiting the Met Gala in extravagant looks that, while instantly memorable on their own, fit seamlessly in with those of the high-class crowd.

In the world of Claws, grooming is not merely an element of the scam but a way for Desnaâ€™s crewâ€”which includes a formerly incarcerated woman, a recovering alcoholic, and an ex-stripperâ€”to gain power in a male-controlled capitalist system where they otherwise wouldnâ€™t get the opportunity. When asked by her fiancÃ©, a Haitian doctor named Gregory Ruval (Jimmy Jean-Louis), what her five-year plan is, Desna responds: â€œBaby, world domination, one manicure at a time.â€� But when Gregoryâ€™s own secret mob connections come to light, she has to face up to who she has become, admitting to her coworker, â€œWe are criminals, Polly, and itâ€™s time we own it, and we take what belongs to us.â€� The explosive second-season finale leaves no doubt about her words.

If Claws presents a complicated portrait of a womenâ€™s journey to crime, AMCâ€™s Dietland offers an inscrutable one. The showâ€™s first seasonâ€”which pondered what might happen if the #MeToo movement became a lot more radical (like underground, murder-the-abusers radical)â€”never made clear which of its female characters to trust.

Though the central figure in Dietland (based on Sarai Walkerâ€™s 2016 novel) is Plum Kettle (Joy Nash), a plus-sized writer awaiting gastric bypass surgery, its most initially obvious scammer is her boss, Kitty Montgomery (Julianna Margulies). As the editor-in-chief of the fictional teen magazine Daisy Chain, Kitty hires Plum to ghostwrite the monthly advice column in which â€œKittyâ€� acts as wholesome den mother dispensing wisdom to her readers. Recognizing the heartbreaking issues that plague Kittyâ€™s â€œgirlsâ€� sets Plum on an eventful road to wokeness. Unlike Claws, Dietland paints the beauty industry (â€œthe dissatisfaction-industrial complexâ€� as one character calls it) as not only a fraud to suppress womenâ€™s self-esteem, but also the tool of a larger system that allows men to get away with violent sexual acts.

One of the show’s most fascinating (and underutilized) characters is the mysterious Julia Smith (Tamara Tunie), who manages Daisy Chainâ€™s beauty closet and has secret connections to the group of vigilante women called Jennifer. Some of the showâ€™s most touching scenes find Julia providing support to the women characters through simply helping them find the right perfume or lipstick. Eventually, when Julia admits to being a double agent, she reveals her â€œtrueâ€� self only after removing layers of makeup, hair extensions, and body-shaping garments. The scene is disappointingly lazy, reinforcing the idea that women use makeup to present a fraudulent image of themselves, scamming the male gaze.

Plumâ€™s body-positive therapist and feminist-consciousness raiser, Verena Baptist (Robin Weigert), doesnâ€™t want to change the system, but instead help women develop coping mechanisms to survive within its constraints. The almost saintly-seeming Verena has dedicated herself to righting the wrongs of her parentsâ€™ pyramid-scheme weight-loss â€œmovement.â€� But Plum rightfully questions her vision of introspective healing: In a scene that parallels recent tales of white women calling the police on innocent people of color in public spaces, Verena gleefully aids in the arrest of three Black Jennifer members. In the showâ€™s finale, Plum is caught between dueling scams, realizing that she can’t return either to Kittyâ€™s world of commodified girl power or Verenaâ€™s haven of consciousness-raising circles. But as she finds herself alone and facing down cop cars, itâ€™s not clear that vigilante justice is a better option.

In a summer of female scammers, both Dietland and Claws stand out for exploring the motivations of their protagonists: Their crimes strike a delicate balance of being justifiable, but not justified. They donâ€™t have the chance to be successful along conventional paths, but that doesnâ€™t mean their actions didnâ€™t come with consequences.

In the real world, Anna Delvey, Yvonne Bannigan, Maria Butina, and the still-nameless Hollywood Catfisher will most likely not reveal the circumstances that drove them to perpetuate their scams. The broad motivations of money, influence, and power are clear, yet not hearing from the women directly services a simplistic, romanticized image of the unapologetic, untrustworthy woman. These stories draw other women in particular like magnetsâ€”with everything up in the air elsewhere, they offer satisfying escapism. Weâ€™ve always known that women commit crimes right alongside men. Claws and Dietland remind us that the social forces that drive female grifters are often scams themselves. 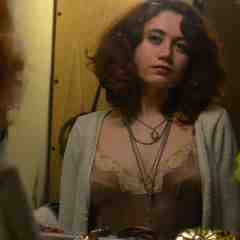 Hannah Steinkopf-Frank is a student at the University of Oregon studying journalism and international studies. Hannah likes to write about anything that lets her do â€œresearchâ€� on Youtube, from early 2000s TV shows to Dolly Parton to makeup tutorials from the 1940s.Â