Skip to content
Jason Rowley
Contributor
Jason Rowley is a venture capital and technology reporter for Crunchbase News.
More posts by this contributor

In the venture capital market, big is in. Firms are raising significant sums to finance a growing number of large startup funding rounds.

In July, there wereÂ 55 venture rounds, worldwide, which topped out at $100 million or more, totaling just over $15 billion raised in nine and 10-figure mega-rounds alone. This set a record for venture dealmaking.

Weâ€™ve already identified approximately when the uptick in huge VC rounds began: toward the tail end of 2013. But where in the world are all the companies raising these supergiant venture capital rounds?

In response to coverage of Julyâ€™s record-breaking numbers,Â many commentersÂ were quick to point out that startups based in China raised six of the top 10 largest rounds from last month.

Indeed, on a recent episode of the Equity podcastÂ discussing the supergiant round phenomenon, Chinese startupsâ€™ position in the market was a hot topic of conversation. Someone suggested that a series of large venture rounds in China may have preceded the run-up in supergiant rounds being raised by U.S. startups.

At least in the realm of nine and 10-figure venture rounds, that doesnâ€™t appear to be the case. The chart below breaks down the monthly count of supergiant rounds by the companyâ€™s country of origin. 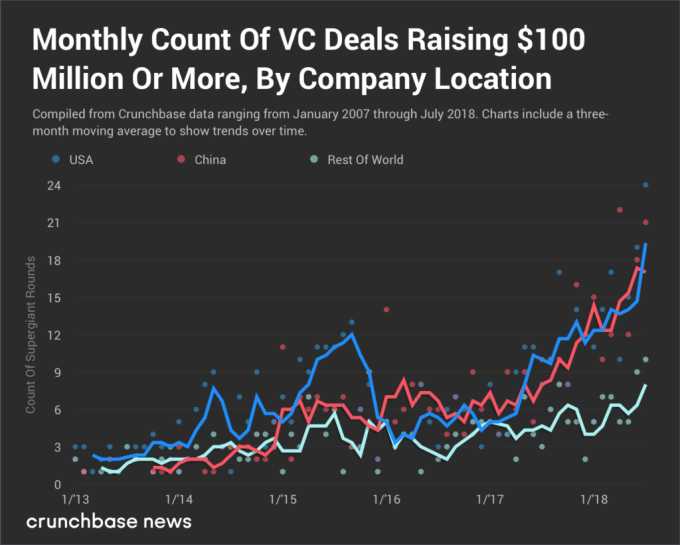 Here is what this data suggests:

Whatâ€™s less obvious in the chart above is just how quickly China became a mega-round powerhouse. The chart below plots the same data as above, except this format shows what percent of mega-rounds originated in each market. Additionally, rather than displaying somewhat noisy monthly amounts, we aggregated data in six-month increments. 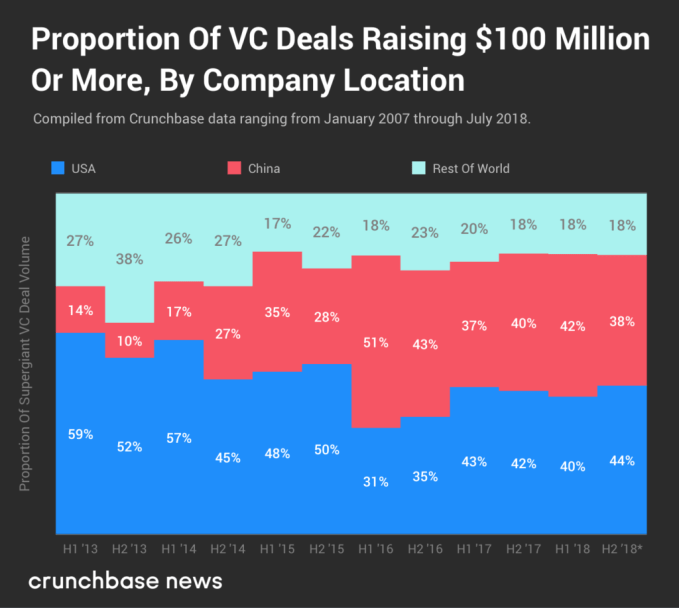 After the start of 2013, it only took a couple of years for Chinese companies to consistently account for roughly 30 to 40 percent of the $100 million-plus VC rounds raised in any given six-month period.

This also reinforces a trend shown in the prior chart: since the beginning of 2017, Chinese startups and U.S. startups are raising roughly the same number of supergiant venture rounds as one another. That number has risen fairly consistently over time.

Before concluding, itâ€™s worth mentioning that our definition of â€œsupergiantâ€� is ultimately arbitrary. Indeed, $100 million is just a tidy, round-numbered threshold to measure against. Our findings would be similar (if somewhat less dramatic) if we counted, say, the set of rounds raising $50 million or more.

The important underlying trend is that round sizes are getting larger on average. And a supergiant wave of money ultimately lifts all rounds, at least a little bit.