Taxify, the ride-hailing company from Estonia backed by Didi and Daimler and now active in 30 countries, is making a key shift in its business today as it gears up for its next stage of growth. The company is removing “taxi” from its name and rebranding as Bolt, the same name that it has been using for its newÂ electric scooter service, to double down on providing multiple transportation options beyond private cars.

The shift in name and vision comes as the company has started talks for another round of funding, TechCrunch has learned.

Bolt last raised money in May 2018, when it closed a $175 million round at a $1 billion valuation led by Daimler. CEO and co-founder Markus Villig confirmed in an interview in London this weekÂ that the next big growth round will be coming in at a higher price tag — he referred to the $1 billion post-money valuation from the last round as a “good start” — in part because Bolt has expanded quite a bit in the interim: it had 10 million users in 25 countries back then; now, it has 25 million users in 30 countries now across Europe, Africa, and other territories.

The rebrand from Taxify to Bolt is serving a few purposes, Villig said. Tapping the basic meanings of “bolt”, the new name implies speed, as well as electricity.

“We are bullish that the future is fully electric and so we wanted a name that moved us away from the combustion engine,” he said.

Putting future engine technology to one side, the move away from using “taxi” in the name alsoÂ underscores how the startup intends to widen its remit to cover more than just car-based rides. Cars may make up the vast majority of Bolt’s service today, but the plan is to add more scooters, other individual transport modes, and soon public transport links, he said, not unlike CityMapper’s multi-modal approach. “The old name was too restrictive.”

Bolt’s growth — Villig describes it as the solid number-two in the European ride hailing market after Uber in terms of rides and revenues — has not been without its bumps. 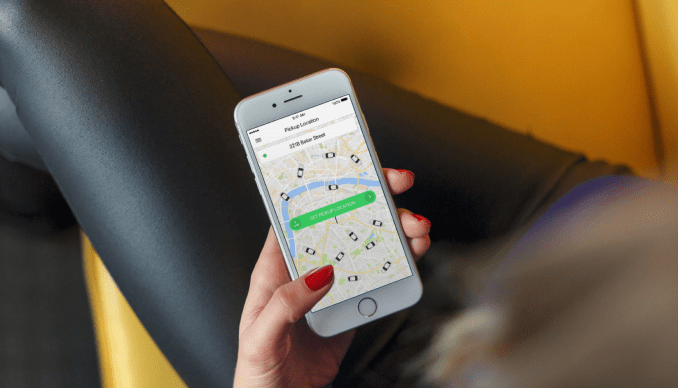 Key among those challenges is that the company has yet to launch a full service in the UK, and specifically London, the biggest ride-hailing market in Europe. Its efforts to come to London stretch back to 2017, during what was probably the height of tension between its chief rival Uber and London regulators. Tired of waiting for its operating license to get approved, Taxify tried to circumvent the process by buying a small firm that already had one and launched services that way. But the regulators were in no mood for funny business: after a mere three days of service, it got shut down.

Since then, Taxify (and now Bolt) has been quietly, and patiently, working on getting a license and approval to operate on its own steam.

“We hope to get going in the next couple of months in London,” Villig said.

That could, confusingly, involve yet another brand. At the end of last year, Taxify rebranded its London app as “Hopp” and started to accept driver sign-ups, but no passengers. It’s not clear whether Hopp will also now rebrand as Bolt, or how it will get used, but at the moment I’m seeing Hopp branding across several areas of the new Bolt site.

While London — and other tense markets for ridesharing startups like Spain and Germany — have all remained elusive, Bolt has used its home base of Estonia to edge into a number of other territories where rules have been less stringent and competition less fierce, including “most of the Central and Eastern European markets.” Sweden is the next country on its launch list, he added.

Driving to the beat of a different drum

To the ordinary passenger or driver, Bolt might look a lot like many other ride-hailing apps you might know such as Uber, but behind the scenes, the two have taken very different tracks when it comes to launching and growing services.

While Uber has pursued a strategy of global domination and (over the years) spending and launching aggressively to gain first-mover advantage in a number of markets, Bolt has done nearly the opposite. Villig — a 25 year-old who built the first Taxify app with his brother Martin when he was only 19 (he dropped out of university after six months to build the business) — is a firm believer in the fact that being a late entrant can be to a company’s advantage.

“Uber has burned most of its bridges in Europe by barging into cities and running as long as they could before getting shut down, and now it needs to recover from that.”

Bridges are not the only thing that Uber has burned. Villig believes that being a later entrant has also meant that Bolt has spent significantly less to educate the market and pick up new customers and drivers for its own private ride-hailing services.

And when it comes to R&D, the company is investing in this — but it’s mainly coming in the form of hiring engineers to improve and expand its mapping and routing instructions for drivers and passengers that have a choice of using multiple services, rather than more costly efforts in areas like self-driving cars. As a point of comparison, Uber has reportedly spent at least $2 billion on its own self-driving car efforts.

“Self-driving is completely overhyped,” Villig said dismissively of how a number of its rivals and would-be rivals are pursuing a strategy to build and therefore “own” autonomous car technology. “It will take at least another five years for anything to come out, and it’s clear that there will be a number of players who will be making self-driving technology, so our plan is to partner with them.”

He added that Bolt is “doing more than $1 billion (gross) in annual rides, which is more than five times the money we have raised. No one comes close to that, and we’re aiming to keep up that efficiency,” he said. “Right now, investors appreciate that there is a ride hailing company out there that is not burning $1 billion per year.”

Bolt has raised around $185 million in total, with backers in addition to Daimler including China’s Didi, TransferWise’s Taavet Hinrikus, Korelya Capital and others.

Given that Bolt has two key strategic investors in the form of Daimler and Didi — both of whom have been making investments and acquisitions to consolidate their positions in the area of on-demand transportation — I asked Villig if he thought either might potentially try to acquire Bolt as part of their own expansion plans.

Didi, he said, has largely been a hands-off investor who was more involved when the company was younger but now is letting Bolt follow its own course in local markets.

“The industry is at the stage now where every market is unique, and you canâ€™t simply transfer knowledge from one to the other. That means less cooperation with Didi,” he said.

Daimler, meanwhile, has amassed a huge number of “mobility” holdings, which last month grew even more when it combined its mobility efforts with BMW’s in a $1.1 billion deal.

Villig acknowledged that there have been multiple acquisition proposals in recent years, but nothing that he would want to entertain seriously for now. Still, he also likened Europe to the US as a market, where realistically there will only be two strong players — just as there is Lyft and Uber in the US.

That means ultimately someone will have to take the lead on consolidation, even if it doesn’t happen immediately.

“Many still the believe that ride hailing is a winner take all model, but now it’s clear thatâ€™s not the case. Every geography will have one or two winners. That’s been the big shift.”