A Trump-inspired GoFundMe campaign that raised $20 millionÂ ostensibly to build a wall on the southern U.S. border will refund every cent. Run by Brian Kolfage, a veteran with a track record of questionable business practices, the project defied all logistical considerations with its proposal for a “simple and straightforward” plan to build the wall. That didn’t stop the fund from attracting the attention of 337,559 donors at the time of writing. 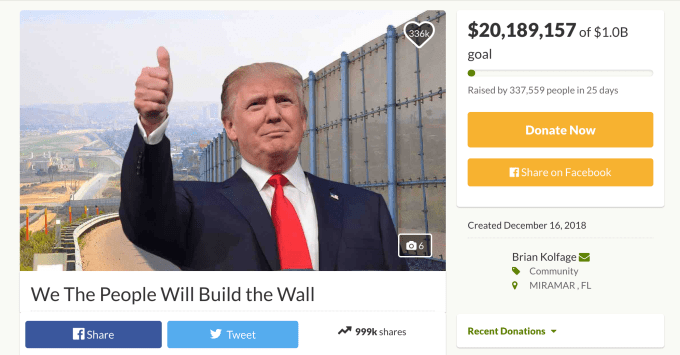 Surprising perhaps no one beyond its donors, the campaign collided with reality, with Kolfage coming to the realization that “the federal government wonâ€™t be able to accept our donations anytime soon” given that there is no actual mechanism through which it could do so. On the campaign page, Kolfage newly disclosed his plans to form a nonprofit, “We Build The Wall, Inc.” that would hold onto the donations until the federal government is able to accept them or until all of the donors eventually forget the project altogether.

Also, as the campaign

, Kolfageâ€™s been changing the language about refunding $

12/18 "If for ANY reason we don't reach our goal we will refund your donationâ€�
12/19: saying they will hold funds, but will refund if goal not hit
12/22: refund promise gone
Now: Will hold all funds pic.twitter.com/nhVvCiNFbN

Kolfage claims that he has formed an advisory board that features war privatization enthusiast andÂ brother of the Secretary of Education Erik Prince and the also ethically questionable former Kansas Secretary of State Kris Kobach, who lost his race this past November.

While Kolfage might be in good company, it sounds like GoFundMe will be automatically handing back every bit of the $20 million he raised before getting called out for changing the terms of the campaign. Donors who still want their money to go to Kolfage will need to opt in specifically.

GM is transforming Cadillac into an electric brand WeWork gets into the food business, backing the superfood startup of big wave surfer Laird Hamilton