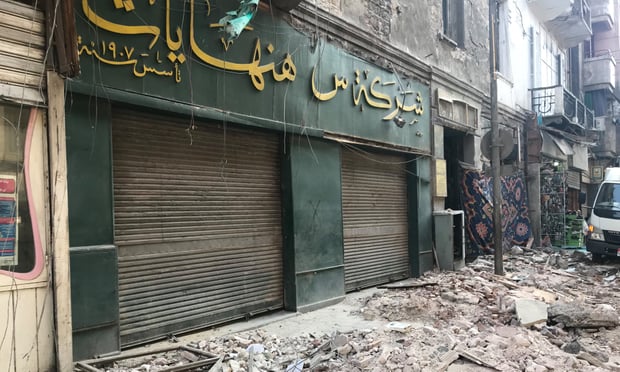 Hinhayat watch shop, with the X marking it out for demolition. Photo credit: Farid Farid/The Guardian

“S.Hinhayat”, Egypt’s oldest watch store located in Cairo’s Maspero triangle was torn down by district workers on 5 and 6 September.

The watch store was opened in 1907 by a Bulgarian watchmaker called Solomon Hinhayat and had been operating for over a century up until last July. Because its location is part of a renovation plan for the district, the district representative Boulaq Abu Ela ordered for the shops demolition.

Solomon does not understand the need to demolish the entire building, arguing that the government had previously destroyed two floors of the building as a result of the 1992 earthquake.

Locals have been arguing that S.Hinhayat, as well as other buildings on the 26 July Street should be regarded as heritage because the architecture is a representation of the city’s history.

While owners of other shops and buildings in the area are protesting the decision and hope that they have a different fate, Ibrahim Abdel Hany, Cairo deputy governor, assured that they will carry out the demolition of all non-governmental building in the district.

The Maspero Triangle is home for overÂ 4,500 locals who, after years of debate, have been relocated. The tenants were devastated upon hearing the news because their lease is under the old property law, a law that prohibited the increase of rent and allowed tenants to pass down their lease to their heirs. The rent is around EGP 10 to 20 per month.

The project aims to turn the district into a financial hub to draw investments. Around 850 families hope to return once the renovation is complete.