Four years ago, Beijing-based Danke set out with a mission to provide more affordable housing for young Chinese working in large urban centers. It applies the coworking concept to housing by renting apartments that come renovated and fully furnished, a model not unlike that of WeWork’s WeLive. The idea is by slicing up a flat designed for a family of three to four — the more common type of urban housing in China — into smaller units, young professionals can afford to live in nicer neighborhoods as Danke takes care of hassles like housekeeping and maintenance. To date, the startup has set foot in ten major Chinese cities.

With the new funds, Danke plans to upgrade its data processing system that deals with rental transactions. Housing prices are set by AI-driven algorithms that take into account market forces such as locations rather than rely on the hunches of a real estate agent. The more data it gleans, the smarter the system becomes. That layout is the engine of the startup, which believes an internet platform play is a win-win for both homeowners and tenants because it provides greater transparency and efficiency while allowing the company to scale faster.

“We are focused on business intelligence from day one,” Danke’s angel investor and chairman Derek Shen told TechCrunch in an interview. Shen was the former president of LinkedIn China and was instrumental in helping the professional networking site enter the country. “By doing so we are eliminating the need to set up offline retail outlets and are able to speed up the decision-making process. What landlords normally care is who will be the first to rent out their property. The model is also copiable because it requires less manpower.”

“We’ve proven that the rental housing business can be decentralized and done online,” added Shen. 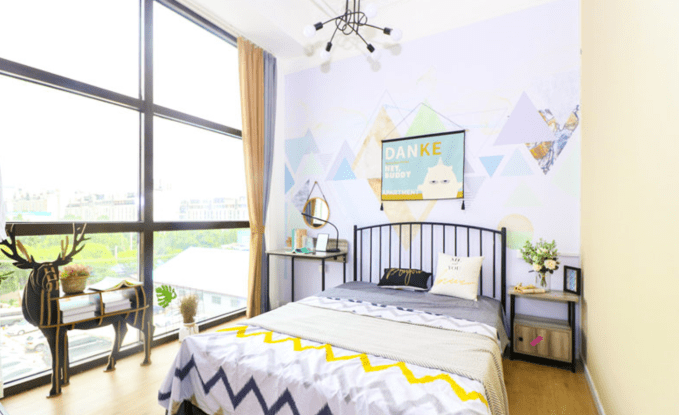 Danke doesn’t just want to digitize the market it’s after. Half of the company’s core members have hailed from Nuomi, the local services startup that Shen founded and was sold to Baidu for $3.2 billion back in 2015. Having worked for a business of which mission was to let users explore and hire offline services from their connected devices, these executives developed a propensity to digitize all business aspects including Danke’s day-to-day operations, a scheme that will also take up some of the new funds. This will allow Danke to “boost operational efficiency and cut costs” as it “actively works with the government to stabilize rental prices in the housing market,” the company says.

The rest of the proceeds will go towards improving the quality of Danke’s apartment amenities and tenant experiences, a segment that Shen believes will see great revenue potential down the road, akin to how WeWork touts software services to enterprises. The money will also enable Danke, which currently zeroes in on office workers and recent college graduates, to explore the emerging housing market for blue-collar workers.

Other investors from the round include new backer Primavera Capital and existing investors CMC Capital, Gaorong Capital and Joy Capital.

China’s rental housing market has boomed in recent years as Beijing pledges to promote affordable apartments in a country where few have the money to buy property. As President Xi Jinping often stresses, “houses are for living in, not for speculation.” As such, investors and entrepreneurs have been piling into the rental flat market, but that fervor has also created unexpected risks.

One much-criticized byproduct is the development of so-called “rental loans.” It goes like this: Housing operators would obtain loans in tenants’ names from banks or other lending institutions allegedly by obscuring relevant details from contracts. So when a tenant signs an agreement that they think binds them to rents, they have in fact agreed to take on loans and their “rent” payments become monthly loan repayments.

Housing operators are keen to embrace such practices for the loans provide working capital for renovation and their pipeline of properties. On the other hand, the capital allows companies like Danke to lower deposits for cash-strapped young tenants. “There’s nothing wrong with the financial instrument itself,” suggested Shen. “The real issue is when the housing operator struggles to repay, so the key is to make sure the business is well-functioning.”

Danke alongside competitors Ziroom and 5I5J has drawn fire for not fully informing tenants when signing contracts. Shen said his company is actively working to increase transparency. “We will make it clear to customers that what they are signing are loans. As long as we give them enough notice, there should be little risk involved.”

YouTube For Children: Is It Still Worth The Risk? Tesla delivers big price cuts to Model S and Model X vehicles