Twitterâ€™s API changes wonâ€™t come out until tomorrow, but its ramifications are already being felt. Tapbots released an update today to Tweetbot for iOS that loses many of the Twitter client’s most popular or essential features. It also removed its Apple Watch app. In Tweetbotâ€™s App Store release notes, Tapbots explained â€œon August 16th Twitter will disable parts of their public interface that we use in Tweetbot. Because Twitter has chosen not to provide alternatives to these interfaces we have been forced to disable or degrade certain features. We are sorry about this, but unfortunately this is totally out of our control.â€� 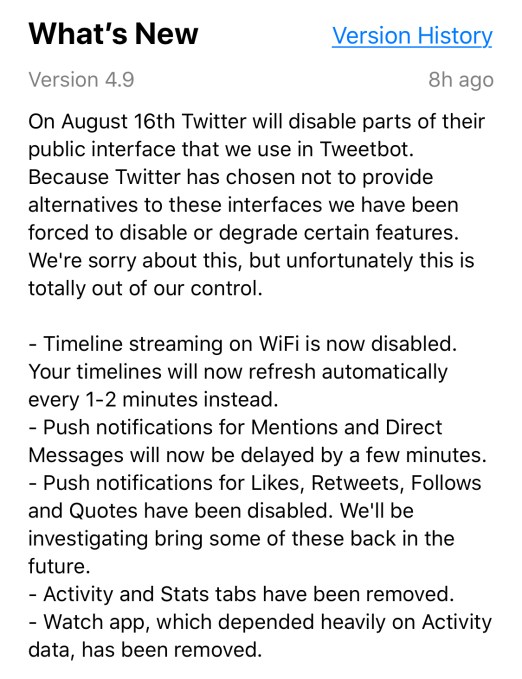 The changes mean that Tweetbotâ€™s timeline streaming is now disabled, so timelines will refresh every one to two minutes instead–a loss for people who want to see new tweets in real-time. Push notifications for Mentions and Direct Messages will also be delayed by a few minutes, while push notifications for Likes, Retweets, Follows and Quotes have been disabled altogether (Tapbotsâ€™ release notes say they are looking at how to reinstate some of those in the future). Tweetbotâ€™s Activity and Stats tabs have been removed.

As part of an effort to tighten control over how its services are used by third-party developers, Twitter announced in April 2017 that it will shut down User Streams, Site Streams and other APIs to prepare for the arrival of its new Account Activity API and other products.

Other third-party Twitter clients that will likely be affected by the API changes include Twitterific, Tweetings and Talon, which along with Tweetbot protested in April that they hadnâ€™t been given enough time or information to prepare for the release, which was originally scheduled for June 19. In response, Twitter extended the deadline to August 16. Other apps that have already been impacted include Favstar, which went offline in June as a result of the API changes.