Twitch is today announcing changes to its security procedures for its TwitchCon event taking place in San Jose, California on October 26-28. The update follows news of the tragicÂ shooting at an esports event in Jacksonville, Florida last month where three people died, including the shooter, and 11 were injured. Twitch said it would review its procedures as a result, and would soon have more information about what it’s doing to keep attendees safe.

Today, the company shared those plans.

Our highest priority at TwitchCon is attendee safety and security. We want to assure you that we are adding additional security measures on top of past event measures. We will have more detailed information on TwitchCon security in the coming days so stay tuned!

According to Twitch, it’s working with San Jose’sÂ local law enforcement, convention staff and additional security services on the event.

The conference will include bag searches and screenings at designated entrance points, and attendees will be limited to carrying just one bag.

Backpacks, luggage, large bags and bulky clothing will not be allowed. In addition, backpacks acquired at the show — even those that are Twitch-branded — will not be eligible for re-entry. There will be an on-site bag check available, but the company suggests that larger bags be left at home as space will be limited. 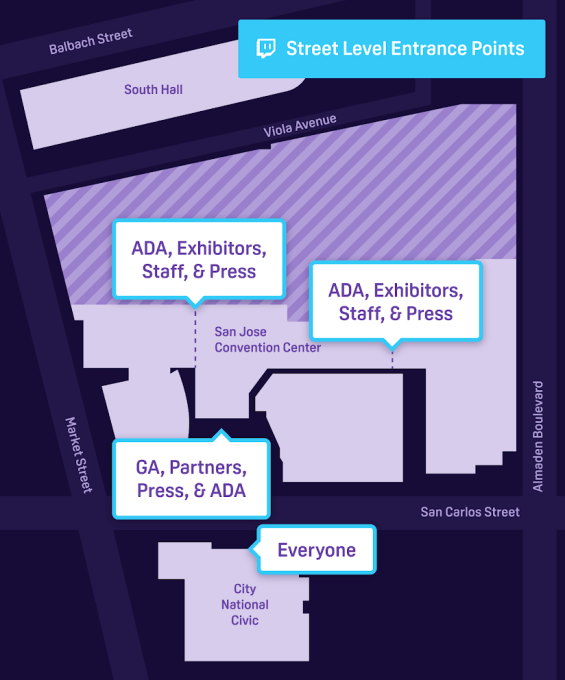 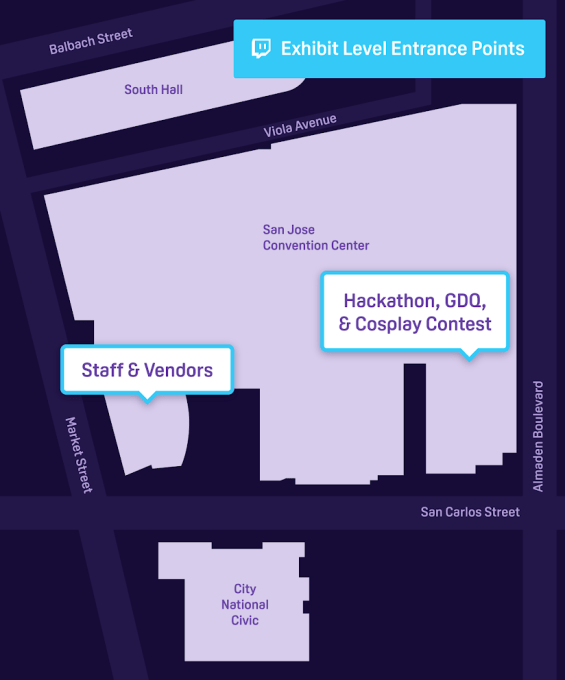 Meanwhile, exhibitors will only be able to hand-carry their products and display materials in oversized bags and rollers before 8 AM on show days — that way there won’t be a way for people to bring in large bags when the event is underway.

Press will also have to wear their press badges, and crews that need to carry their large camera equipment will need to be approved.

Of course, the event has a no weapons policy as well, and anyone in violation will be removed without refund.

Badges must be worn at all times, and an ID or passport needs to be on hand, as well. The company’s security plan before Jacksonville had also included bag searches, walk-through or hand-held scanners, the use of uniformed guards, ID checks and the wearing of badges.

The biggest on-record change appears to be the backpack ban.

However, we understand the reference to Twitch’s closer work with law enforcement services and the “additional security services” is a reference to other changes that may not have been fully detailed. (We’d guess this is likely because Twitch doesn’t want to provide too much information to anyone trying to workaround its security procedures.)

The annual TwitchCon event brings together the Twitch community to play games, watch live esports, participate in hackathons and cosplay contests, attend sessions and hear from the company about what’s next for the live game-streaming service.

Last fall, for example, Twitch unveiled a new set of tools at TwitchCon that would allow creators to make money from their online channels.

However, the events in Jacksonville have had many of TwitchCon’s regular attendees concerned about event safety.

After all, the video game competition, taking place at the GLHF Game Bar in Jacksonville, Florida, had been live-streamed on Twitch when the shooting happened. Would a copycat try to get into Twitch’s conference?, some have wondered.

According toÂ reports, the Florida shooter had been upset about losing two games of Madden earlier in the tournament, even refusing to shake hands with the winner after one game.Â Despite a history of mental illness, the shooter had been able to legally acquire his weapons. It wasn’t clear how he got them into the Jacksonville bar.

Sadly, mass shootings in the U.S. have now taken place at schools, movie theaters, churches, concerts, workplaces — even atÂ YouTubeÂ —Â  and elsewhere. But they had not yet before occurred at an esports event.

The tragic event brought attention on the esports industry as a whole, which still sits somewhere outside of mainstream attention, despite Twitch havingÂ more than 2 million broadcasters and 15 million viewers who tune in daily to watch.

We are shocked and saddened by the tragedy that took place in Jacksonville today. Twitch and all its staff send our deepest sympathies to the victims, their loved ones, and everyone in our community who's grieving today.

Shortly after the tragedy, Twitch said it would make changes.

“Security at TwitchCon is our top priority and is something we take very seriously at all our events,” the company told TechCrunch in August. “We regularly review and iterate on our policies and approach in order to provide a safe and positive experience for staff, attendees, and exhibitors. In the wake of yesterdayâ€™s tragedy we will be re-reviewing our plans and updating them accordingly,” a spokesperson had said at the time.

The updated plans for TwitchCon are detailed on Twitch’s blogÂ and its FAQ.

It’s not really a ‘budget’ phone, but the iPhone XR is still a great value Serious design flaw in ESS ExpressVote touchscreen: “permission to cheat”