Virtual reality gaming and the pursuit of “flow state”

Maggie Lane is a writer and producer of virtual reality experiences and covers the industry for various publications.
More posts by this contributor

You need to stop procrastinating. Maybe itâ€™s time for some…

Whatever your choice, workers today (especially in the tech industry) will do just about anything to be more productive.

What we seek is that elusive, perfect focus or flow state. According to researchers, someone in flow will experience a lack of sense of self, a decline in fear, and time distortion. It is peak performance coupled with a euphoric high. All your happy neurotransmitters fire, and your dorsolateral prefrontal cortex performs differently –you do not second guess yourself, you quite simply just flow into the next stages of the activity at hand. And you happen to be performing at the highest level possible. Sounds amazing, right?

But how do we invite this state in? A detailed piece in Fast Company outlines how extreme sports (professional surfing, steep incline skiing, skydiving etc.) are the quickest way weâ€™ve found to tap into human flow. Yet, these hobbies are just that — extreme. They require a large amount of skill and can be dangerous. For example, Steven Kotler, a pioneer in flow state research, broke almost 100 bones as a journalist researching the topic.

It all leads back to our collective (and very American) obsession with input versus output –are we achieving the most possible with the energy we put in? For all the bells and whistles at our disposal, we as a society are steadily declining in productivity as time goes on.

In 2014, a Gallup Poll found that the average American worker only spends a depressing 5% of their day in flow. A 2016 Atlantic article hypothesized that the main reason that weâ€™re decreasing in productivity as a workforce is that weâ€™re not introducing new technologies quickly enough. Tech like robotics and smartphones could add a productivity push, but arenâ€™t being integrated into the workplace. Business models are for the large part not that different from 10 years ago. In essence, weâ€™re bored â€” weâ€™re not being challenged in an engaging way, so weâ€™re working harder than ever but achieving less.

But what if getting into flow state could be as easy as playing a video game? 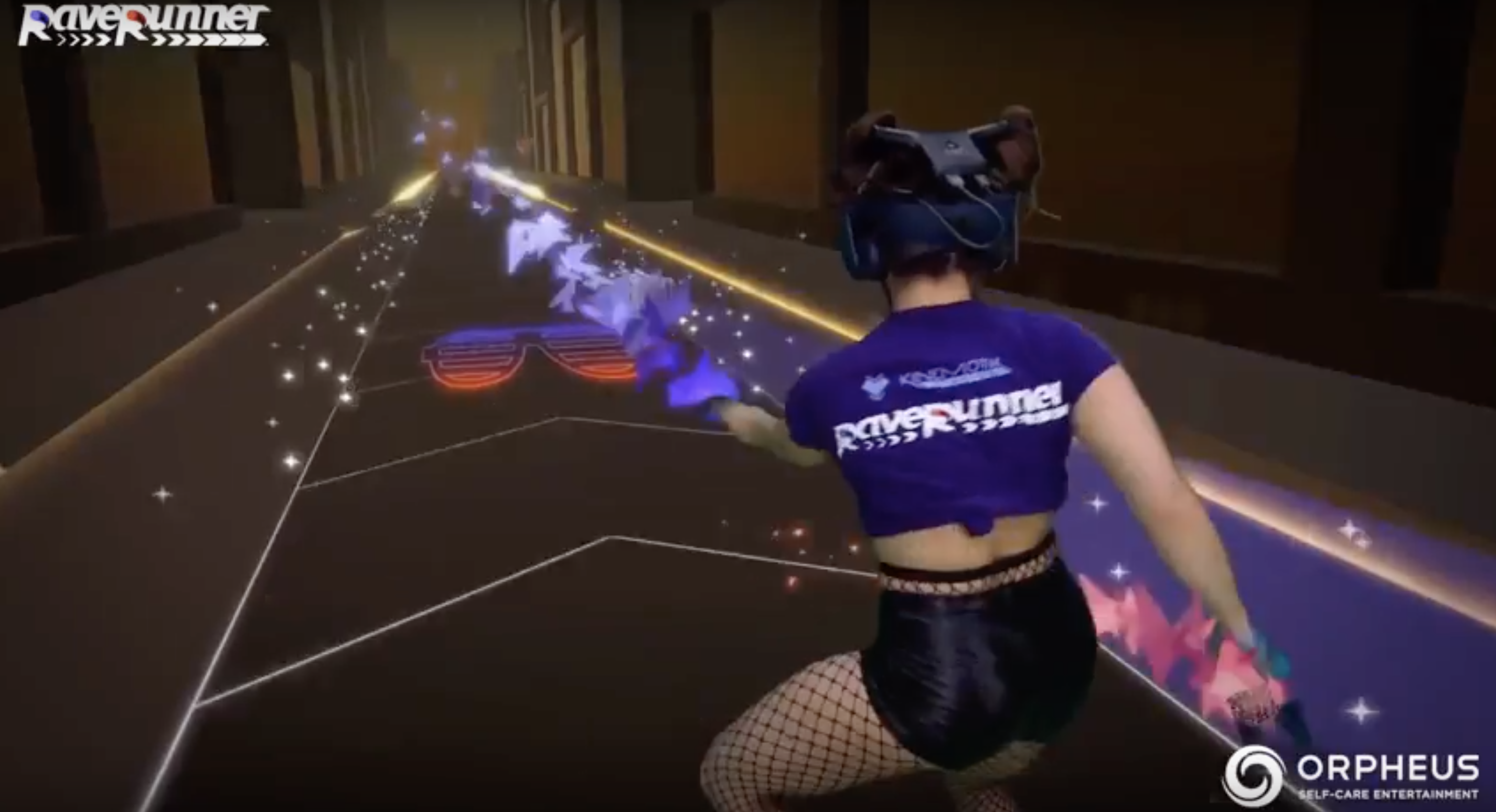 I first met Job Stauffer, Co-Founder and CCO at Orpheus Self-Care EntertainmentÂ when I was, in fact, procrastinating from work. I was scrolling through Instagram and saw a clip of Job playing RaveRunner. As I love rhythm games, I immediately requested a build. Yet, Iâ€™d soon learn that this wasnâ€™t just a simple VR experience.

RaveRunner was built for Vive, but easily ran on my Rift. When I first stepped into the game, I felt a bit overwhelmed — there was a lot of dark empty space; almost like something out of TRON. It was a little scary, which is actually very helpful for entering flow state. However, my fear soon dissipated as before me was a transparent yellow lady (Job calls her â€œGoldieâ€�) dancing with the beat — providing a moving demo for gameplay. Unlike the hacking nature of Beat Saber where you smash blocks with lightsabers, in WaveRunner you touch blue and orange glowing circles with your controllers, and move your whole body to the rhythm of the music.

Thereâ€™s a softer, feminine touch to WaveRunner, and it wasnâ€™t just Goldie. Behind the design of this game is a woman, Ashley Cooper, who is the developer responsible for the gameplay mechanics that can help a player attain flow. â€œBeing in the flow state is incredibly rewarding and we strive to help people reach it by creating experiences like RaveRunner,” says Cooper. RaveRunner is a game you can get lost in, and by stimulating so many senses it allows you to let your higher level thoughts slip away — you become purely reactionary and non-judgemental.

After playing in this world for an hour, I called Job and learned more about his company. Apart from RaveRunner, Orpheus has also rolled out two other experiences â€” MicrodoseVR and SoundSelf. I got my first hands-on demo of all three products in one sitting at a cannabis technology event in Los Angeles, Grassfed LA. Grassfed is specifically geared towards higher brow, hip tech enthusiasts; and the Orpheus suite of products fit right in.

As I lay in a dome with meditative lighting; a subwoofer purring below me; SoundSelf gave me one of the most profound experiences Iâ€™ve ever had in VR. I chanted into a microphone and my voice directly influenced the visuals before me. It felt like my spirit, the God particle, whatever you want to call it, was being stimulated from all these sensations. It was such a beautiful experience, but also was pure flow. I felt 2 minutes pass in the experience. I would have bet a hundred dollars on this. But I was inside for 10. Time didnâ€™t make sense — a key indicator of flow state.

Next up was Microdose VR. I first tried Microdose VR in 2016 at the Esalen Institute in Big Sur. Esalen is the birthplace of the human potential movement, and so it was fitting that it was there, where I initially grasped the potential of VR for transformational experiences. Every other experience I had tried up to that point had been First Person Shooters or 360-video marketing pieces. And not to slight those experiences, but I felt that VR must be able to do MORE. Android Jonesâ€™ Microdose blew my mind. Like with SoundSelf, I completely lost track of time. I was directly impacting visuals with my body movements, and sound was a big factor as well. It was the first time I could easily imagine staying in VR for hours. Most of all, it was an experience that was only possible within VR. The game was the biggest euphoric rush Iâ€™ve felt in VR, and that feeling occurred again at this event.

We have the power as consumers to play games that tie in intrinsically with self care but often donâ€™t have options available. Job was propelled down this path when he asked himself â€œif I invest one hour of my time per day into playing a video game, what will I personally gain from that time invested, and will I even have time left over to do genuinely good things for myself?â€�

Orpheus is pioneering the fusion of game design with traditional self-care practices like meditation, dance/exercise, listening to music and creating art: â€œIn short, we simply want players to feel amazing and have zero regrets about their time spent playing our games, allowing them to walk away knowing they have leveled up themselves, instead of their in-game avatars alone.â€�

One thing that will make it easier for people to try these experiences are portable headsets such as the ViveFocus and the Oculus Quest. Being untethered will allow people to travel with VR wherever they may go. Job sees this fundamental shift right ahead of us, as â€œvideo games and self-care are about to become one in the same. A paradigm shift. This is why all immersive Orpheus Self-Care Entertainment projects will be engineered for this critically important wave of VR.â€�

Orpheus is not a VR-only company, although their first three experiences are indeed for VR. As they expand, they hope to open up to a variety of types of immersive experiences, and are continually looking for projects that align with their holistic mission.

At the end of the day, I love that Orpheus is attempting to tap into a part of the market that so desperately needs their attention. If we donâ€™t make self-care a major part of VR today, then weâ€™ll continue to use VR as a distraction from, as opposed as a tool to enhance, our daily lives.

As for me, along with the peppermint tea, grapefruit candle, and music that make my focus possible, Iâ€™ll now be adding some Orpheus games into my flow repertoire.