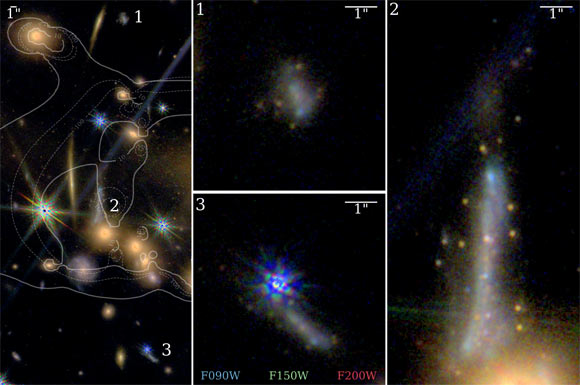 Globular clusters are densely packed systems of stars, gravitationally bound into a single structure between 100 and 200 light-years across.

They contain hundreds of thousands or perhaps a million stars. The large mass in the rich stellar center of a cluster pulls the stars inward to form a ball of stars.

Globular clusters are among the oldest known objects in the Universe and are relics of the first epochs of galaxy formation.

It is thought that every galaxy has a population of globular clusters. Our Milky Way Galaxy hosts at least 150 such objects and a few more are likely to exist hidden behind the Galaxy’s thick disk.

“Despite being the subject of very active research for decades, we do not know when, or understand how, globular clusters form,” said Dr. Lamiya Mowla, a postdoctoral researcher at the Dunlap Institute for Astronomy and Astrophysics, and her colleagues from Canada, Denmark, Japan, Slovenia and the United States.

“We do know that most globular clusters in the Milky Way, and those around nearby galaxies, are very old.”

“There are two general views on how globular clusters formed,” they added.

“In the first, globular cluster formation is a phenomenon occurring predominantly at very high redshift, with a deep connection to initial galaxy assembly. In this view, globular clusters are a special phenomenon associated with conditions in the early Universe, and their formation channel is different from that driving present-day star formation.”

In their study, Dr. Mowla and co-authors used data from Webb’s Near Infrared Camera (NIRCam) and Near Infrared Imager and Slitless Spectrograph (NIRISS) to analyze the nature of point sources (sparkles) seen around a gravitationally lensed galaxy in Webb’s First Deep Field.

Nicknamed the Sparkler, this galaxy is strongly magnified by a factor of up to 100 by SMACS J0723.3-7327, a massive cluster of galaxies within the southern constellation of Volans.

The galaxy has a redshift of z=1.378, meaning we see it as it existed approximately 9 billion years ago.

The astronomers were able to detect at least twelve ‘sparkles’ in and around the Sparkler.

“At least five of the twelve sources are unresolved and red, and the most likely interpretation of these is that they are evolved globular clusters seen at z=1.378,” they said.

“By modeling the colors and spectra of these sources, four (33%) are found to be consistent with simple stellar populations forming at z> 9, i.e., in the first 500 million years of cosmic history and more than 13 billion years before the present epoch.”

“If confirmed with additional spectroscopy, these red, compact ‘sparkles’ represent the first evolved globular clusters found at high redshift, could be amongst the earliest observed objects to have quenched their star formation in the Universe, and may open a new window into understanding globular cluster formation,” the authors concluded.

A paper on the findings will appear in the Astrophysical Journal Letters.