This week WeWork announced that its Chinese subsidiary â€”Â WeWork ChinaÂ â€”Â raised an additional $500 million in capital in a deal led by SoftBank, Temasek HoldingsÂ and others. The deal reportedly values the Chinese branch of the shared workspace and real estate management company at $5 billion, up from $1 billion (post-money) in the round WeWork China announced almost a year ago in July 2017.

SoftBank rarely doubles down on a particular company. At time of writing, SoftBank itself has made 175 investments in 144 different companies, according to Crunchbase data. Of those, just 23 companies raised more than one round from SoftBank. And in conjunction with its China branch, with four cumulative transactions on record, WeWork is tied for first place in a ranking of companies most-engaged with SoftBankâ€™s investment arm.

That being said, SoftBankâ€™s investment strategy appears to be one of taking stakes in leading companies from a given sector. And although itâ€™s sometimes difficult to tell just how large some of those stakes are as a percent of equity in the company, SoftBank finds itself involved in many companiesâ€™ biggest rounds to date.

Take WeWork for example. If you take all of the equity funding rounds raised by its main corporate entity and regional offshoots like WeWork China and WeWork India, youâ€™ll find that SoftBank was either the sole investor, the round leader or a syndicate participant in the rounds that delivered the lionâ€™s share of capital to the company. 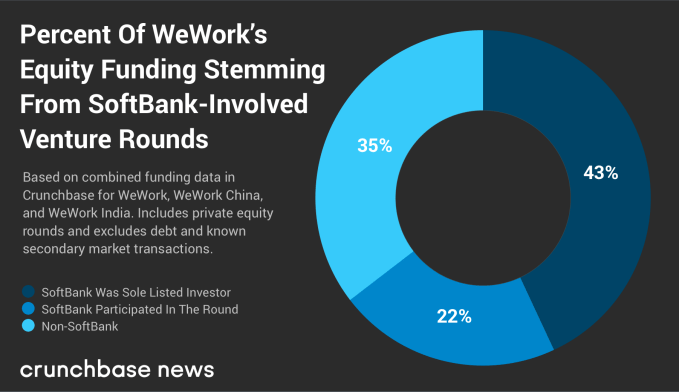 If the market opportunity is big, SoftBank will typically make investments in regionally dominant companies operating in that sector. After all, if worldwide dominance is difficult to obtain for any one company, SoftBank is so big that it can take positions in the regional leaders, creating an index of companies that collectively hold a majority of market share in an emerging industry.

Itâ€™s a bold strategy that involves taking some big risks and writing big checks. As a result, SoftBank is typically the largest single investor â€” in terms of dollars committed â€” in the fastest-growing companies in an industry.

Real estate is just one theme

WeWork is just one facet of SoftBankâ€™s real estate investment efforts. The table below shows a selection of SoftBankâ€™s investments in the real estate and construction sector. Itâ€™s ranked by the amount of money invested in rounds involving SoftBank (either as the sole investor or as part of a broader syndicate). We also show what percent of total known equity funding SoftBank-involved rounds account for. 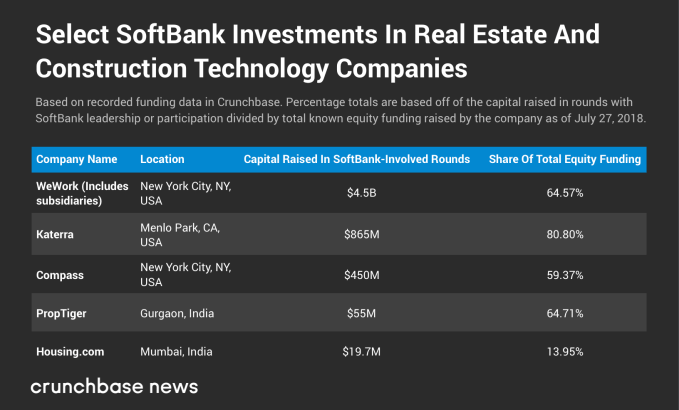 SoftBankâ€™s strategy of writing big checks to successful startups in large and growing market segments extends past real estate, of course. It touches many other industries, including e-commerce and logistics, insurance and healthcare, and, perhaps most contentiously, ride-hailing and on-demand transportation.

SoftBank also has a strong portfolio of artificial intelligence companies to flex at some point down the road. It has invested in the likes of Nvidia, Improbable, Brain Corporation, PentuumÂ and others. Furthermore, its stakes in Mapbox and Cruise Automation are advantageous to SB Drive, its own autonomous vehicles effort.

SoftBank is one of the cases of everything old being new again. In the late 1990s, SoftBank and its founder Masayoshi Son were some of the biggest investors in tech. Then, like today, Son aimed to forge a kind of virtual Silicon Valley in SoftBankâ€™s portfolio, a platform for symbiotic, cooperative relationships and business partnerships to emerge. Thereâ€™s definitely the possibility for this sort of bonhomie to emerge today, given the thematic nature of the firmâ€™s investment strategy. But at the same time, Son is famous for losing a lot of money when the first tech bubble collapsed. It remains to be seen whether the firm will make it out on top the second time around.