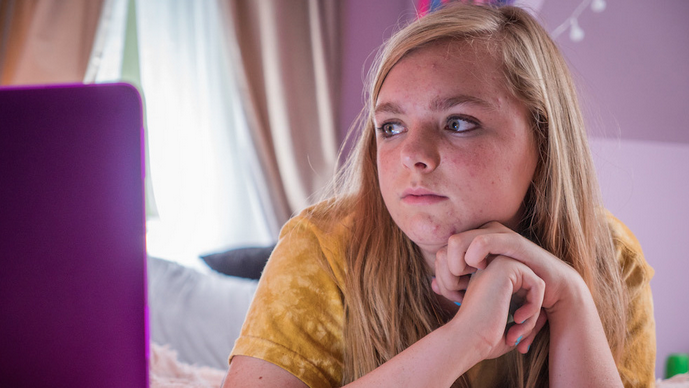 The title character of Matt Spicerâ€™s 2017 dark comedy Ingrid Goes West is a mentally unstable woman (played by Aubrey Plaza) who copes with the recent death of her mother, as well as other undefined issues, by stalking women via Instagram. Her latest mark, Taylor (Elizabeth Olsen), quickly becomes a Single White Femaleâ€“esque obsession; in an effort to be just like her new idol, Ingrid dyes her dark hair blonde and quickly adopts the tastes and speaking patterns of a white Instagram influencer. She sinks the money left to her by her mother into the delusion, with little to no concern for the people she hurts in the processâ€”including, ultimately, herself.

Since the mass mainstreaming of social media in the 2010s, young women have been the easiest targets for shallow, reactionary cultural commentary about its potential for damage. And while Ingrid drew praise from reviewers who called it â€œwickedly funnyâ€� and â€œshrewd satire,â€� to me it read as a bleak, sexist caricature of a very common view about young women on social media. The film doesnâ€™t just mock Ingrid as a lonely person who escapes into fantasy, it makes fun of women in general. Once Ingrid gets to know Taylor, she finds out that nearly everything her new friend posts is a lie. Taylor knows painfully little about the art and literature she claims to be interested in online; a book she claims is her favorite is actually her husband Ezraâ€™s. A heart-to-heart talk with Ezra himself (Wyatt Russell) reveals that Taylor, too, is playing a role online, and no longer resembles the woman he married. Somehow, the power of all those Instagram hearts and comments changed who she was.

This is why Bo Burnhamâ€™s debut film, Eighth Grade, feels so important: Finally, teenage girls growing up in the harsh glow of social media have truly empathetic representation. Burnhamâ€™s humorous, emotional feature is a thoughtful exploration of what young women actually get from social media, rather than what adult journalists assume theyâ€™re seeking. Eighth Grade centers on Kayla (the phenomenal Elsie Fisher), who in her last two weeks of eighth grade is preparingâ€”or trying to prepareâ€”for the transition to high school. Kayla is a quiet girl (with what seems to be an undiagnosed anxiety disorder) who has spent her middle-school years as a wallflower. The only time she feels confident is at home, where she makes short YouTube videos giving tips and advice on life.

Searching for the terms â€œteenage girlsâ€� and â€œsocial mediaâ€� yields a flood of articles about what Instagram, Snapchat, and the entirety of the internet have done to ruin the lives of young women.

Burnham, who started his own career as a YouTube performer, demonstrates a keen understanding of a seemingly contradictory idea: that the most comfortable place for an awkward teen afraid of personal interaction is often in front of a camera. The first four of the six videos Kayla makes cover familiar staples of self-help media: â€œBeing Yourself,â€� â€œPutting Yourself Out There,â€� â€œBeing Confident,â€� and â€œGrowing Up.â€� The videos are bare-bones in presentation: She stands, looks straight into the camera, and offers up  words of encouragement to her viewers, never revealing how much she struggles offscreen to take her own advice.

By the fifth video, however, Kayla comes clean, admitting that she really doesnâ€™t know how to put herself out there, or be herself, or be confident. Not unlike Ingrid Goes Westâ€™s Taylor, Kayla had been employing a fake-it-til-you-make-it front that could no longer hold once real life became even more complicated. After watching Kayla slowly crawl out of her shell throughout the film, itâ€™s heartbreaking to see her give up the one thing that always consistently managed to make her smile. As her father (Josh Hamilton) might say, to watch Kayla is to love Kayla: Though itâ€™s clear that sheâ€™s not in the best place emotionally or socially to give advice, watching her is appealing, her signature sign-off â€œgucciâ€� adorable in its corniness.

These videos, including a sixth that I wonâ€™t spoil here, display an earnestness that makes clear how much Kayla cares about other people and wants them to be happy. While recording, she often gets tongue-tied and stutters, but nevertheless powers on, fueled by positivity and a strong desire to be helpful. Though Kayla presents herself as more confident than she actually is, her videos never come off as inauthentic; rather, they show the world the person that she wants to beâ€”worldly and wise. Sheâ€™s not using YouTube to pitch bankable platitudes with the goal of eventually becoming a well-compensated brand. This is a girl who uses her videos to do the thing she desperately wants to do in real life: talk to people and be good to them.

Itâ€™s important for young women to see their lives as users and consumers of social media reflected as natural, well-meaning, and honestâ€”something Burnham acknowledged when he made sure that the R-rated film could be seen by actual eighth graders, if only for a night. This may not defuse the pearl-clutching bombast of prevailing narratives about social media young women, or the fearmongering thatâ€™s clearly based in sexism. Lives spent looking at devices and screens is a reality for most of us, for better or worse; Eighth Grade is notable because it consciously avoids serving up a familiar media brew of technophobia and misogyny. Teenage girls can speak for themselves, but they need more of us to listen.