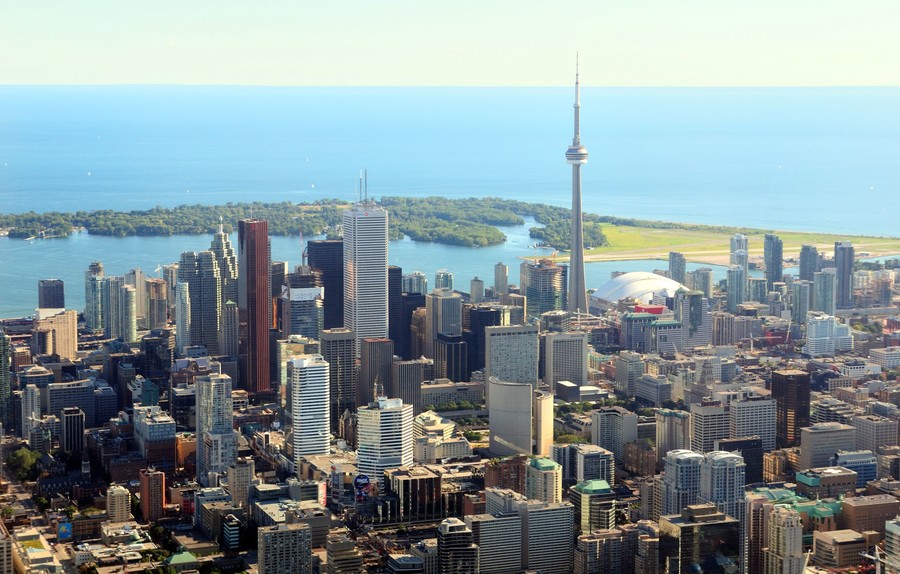 Like many major cities, Toronto has spent decades branding itself as a refuge for both international migrants and Canadian transplants, with varying degrees of success. More recently, itâ€™s decided to rebrand as a new tech hubâ€”a city teeming with hungry innovators, a city that young, bright and diverse creatives are flocking to. Desperate to finally realize its potential as a â€œworld-class cityâ€�â€”one with a reputation and pull that matches other tech centers like San Francisco and Austin, Texasâ€”Toronto, with the help of its provincial and federal governmental partners, has embarked on an audacious private-public partnership with one of techâ€™s biggest players. Sidewalk Labs, the urban-development arm of Alphabet (the parent company of Google), has signed on to help Toronto redevelop 12 acres of the cityâ€™s waterfront.

The end result will be Quayside, a fully functional prototype of Sidewalkâ€™s â€œneighborhood of the future.â€� The project itself has been named Sidewalk Toronto, a name so nondescript that it makes you wonder what Sidewalk Labs and its partner Waterfront Toronto (a corporation founded and funded by municipal, provincial, and federal levels of government) might be trying to hide. Almost as suspiciously bland is the term â€œsmart city,â€� which is often used by local media and Sidewalk Labs when describing the project fits into Torontoâ€™s larger development plans.

Torontoâ€™s branding efforts have obscured how many long-term residents of colorâ€”many, like me, born and raised hereâ€”continue to experience the city, as a constellation of dozens of unique neighbourhoods within six boroughs, each defined by a landscape of ever-contested political and geographic borders. â€œSmart cityâ€� is a vague, buzzy term that researcher and writer Molly Sauter asserts is often used to â€œconceal a lot of the corporate financial structuresâ€� behind projects like Sidewalk Toronto. And itâ€™s a term fitting for a city with a cultural and urban-planning legacy of, as Amani Bin Shikhan recently wrote in The Believer, â€œburying itself alive at home.â€�

Quayside will be the latest neighborhood to join Torontoâ€™s multiverse of urban geographies, and the fervor around it is accompanied, predictably, by plenty of backlash playing out in real time on social media. But whatâ€™s often been neglected in the discourse around Sidewalk, and Torontoâ€™s tech rebrand more broadly, are historical patterns and experiences of migration and (re)settlement of the cityâ€™s longtime residents. And while this project has serious implications for the future of city building and civic engagement for all Toronto residents, paying close attention to these how these patterns have shaped the lives of Black residents in particular is key to understanding its current social and political conditions.

One misconception about migration to Canada is that once you reach a major city like Toronto (or Montreal, or Calgary, or Vancouver), the journey ends. For some, that may be the case. But for many others, landing in Canada is only the beginning of their journey. My familyâ€™s migration from Ghana to Canada began with an initial stop in Montreal, then several moves across low- income, racially diverse neighbourhoods across Torontoâ€™s downtown core, followed by moves to the neighborhood of Jane and Finch in North York (a former suburb amalgamated into Toronto in 1998, along with five other neighboring suburbs). That was followed by a short stint in nearby Scarborough, and, eventually, settling in another North York neighbourhood, Flemingdon Park. In other words, my familyâ€™s migration story within Toronto is similar to those of many Black residents, so much so that it feels a bit trite to retrace that journey here.

Discrimination built into Canadaâ€™s immigration process prevented Black Africans from migrating to Canada in significant numbers until the enaction in the 1970s and 1980s of changes in immigration criteria and refugee policies. Prior to these shifts, the Canadian government sought out Black Caribbean immigrants to help meet the demand for skilled laborers to help build the urban and suburban communities of post-war Canada. The countryâ€™s highly gendered immigration policies also brought in thousands of Carribean womenâ€”or, at least, those who were â€œhealthy,â€� single, and between the ages of 18 and 35â€”as domestic workers under the West Indian Domestic Scheme of 1955.

Toronto has been successful at ahistoricizing Black communities by perpetuating a myth about Black migration to and within Toronto as a recent phenomenon, and its Black residents as always newly arrived or never settled.

Earlier in Canadaâ€™s history, York, (the town that would eventually become Toronto), was home to hundreds of enslaved Africans brought to Canada by British Loyalists. A number of Torontoâ€™s founders, like Provincial Secretary William Jarvis, were themselves slaveownersâ€”Jarvis actually fought to keep slavery legally available to white men in Canada. Every successive wave of Black migration to and settlement in Toronto has brought with it new ways of community building, which in turn offer new visions for Torontoâ€™s urban future. These visions are integral to Toronto becoming the city that it is today, and the one it might be in the future.

But as geographer Katherine McKittrick argues, â€œ[B]lack people in Canada are […] presumed surprises because they are â€˜not hereâ€™ and â€˜hereâ€™ simultaneously: [T]hey are, like blackness, unexpected, shocking, concealed in a landscape of systemic blacklessness.â€� In effect, Toronto has been successful at ahistoricizing Black communities by perpetuating a myth about Black migration to and within Toronto as a recent phenomenon, and its Black residents as always newly arrived or never settled. This conceals the tension of â€œnot hereâ€� and â€œhereâ€� felt by many  of Torontoâ€™s longtime Black residents and serves to deny their connections to the urban spaces that they have helped shapeâ€”and to undermine any sense of agency over or entitlement to that space. The area that Sidewalk Toronto will develop is mostly industrial land, but the swiftness with which this partnership is moving forward suggests a similar disregard for the broader public and its own relationship to public space.

Quayside has already prompted important debates about privacy and consent regarding data collection and management within the city; critics are concerned that Sidewalk Toronto has not provided a way for residents and visitors to opt out of having their data collected. Beyond issues of privacy, though, Sauter argues that data-collection systems â€œcan only see what they already seeâ€�â€”or, in other words, that new data regularly slips through the cracks because computer systems are only equipped to recognize certain kinds of it. And what those systems can recognize as data is what tech companies see as commodifiableâ€”and, by extension, valuable. In its partnership with Sidewalk Labs, Toronto has reduced its residents to a new extractive resource whose output can be sold to or used by tech companies to develop products.

A look at Torontoâ€™s (and more broadly, Canadaâ€™s) history of Black and Indigenous slavery and indentured servitude is a reminder that seeing personhood as a commodity isnâ€™t new; itâ€™s also important to remember, as writer Lorraine Chuen argues, the ways that all racialized groupsâ€”but Black and Indigenous populations in particularâ€”have always been surveilled in Canadian cities. For as long as Toronto has existed, Black migrants and residents have had to meet a level of accountability to their host city in ways that another kind of migrantâ€”tech companiesâ€”have not, despite their dubious claims of job creation and untested approaches to city planning.

Even now, Black residents must justify or provide an excuse for their presence in certain spaces across the cityâ€”a keenly felt irony given that Black migrants have been instrumental in building the community resources and institutions on which Toronto has been able to build its reputation for openness and inclusivity. For Black residents, the partnership between Sidewalk Labs and the city of Toronto isnâ€™t an innovation so much as it is simply an increase in hypervisibility that renders them potentially both more vulnerable to surveillance due to algorithmic bias, as well as more invisible to the same government and corporate entities that could help make the city more livable for them. Itâ€™s a vision of the future that is very different than the one Sidewalk Toronto presents in its marketing.