Xiaomi posts $2.1B profit in its first quarter as a public company

Chinese smartphone firm Xiaomi has posted a $2.1 billion profit for its first quarter of business as a public company on account of growing smartphone and hardware sales.

The firm listed in Hong Kong in JulyÂ in an IPO that raised $4.7 billion, but Xiaomi’s share price has steadily fallen since then. The company announced today that it grew revenue 68 percent in Q2 2018 to reach 45.2 billion RMB, or $6.6 billion.Â Xiaomi posted a net profit of 14.6 billion RMB ($2.1 billion), but it recorded an operating loss of 7.6 billion RMB ($1.1 billion) for the period due to significant administration costs around the listing. Costs had also weighed it down in the lead up to the IPO.

Those initial results raise the firm’s shares by 1.6 percent at the time of writing. But it remains some way from theÂ HK$21.55Â peak reached last month. 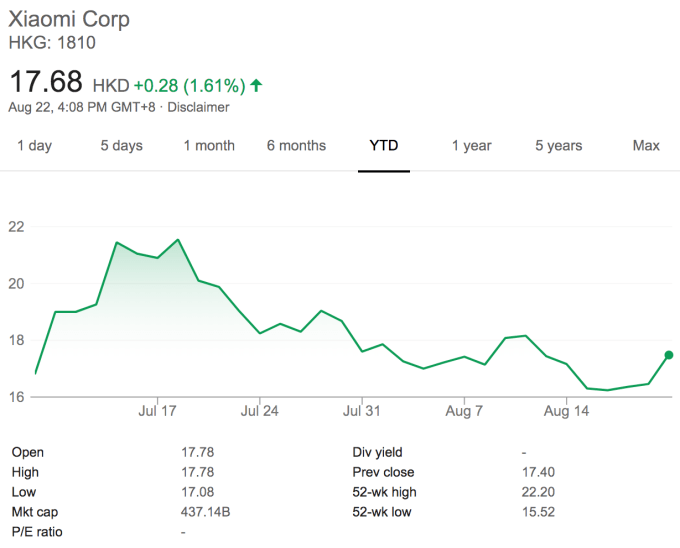 The bulk of Xiaomi’s revenue is from smartphone sales and the firm said it shipped 32 million during the quarter, up 44 percent year-on-year, which brought in 30.5 billion RMB ($4.5 billion). That’s 67 percent of all revenue, although it is worth noting that gross profit on hardware sales slipped to 6.7 percent from 8.7 percent last year.

Beyond phones,Â sales of other smart products, which includes TV and fitness bands, grew by over 100 percent to reach 10.4 million RMB. That’s around $1.5 billion and Xiaomi’s next largest revenue source.

Internet services, a segment that Xiaomi has long forecast as a financial differentiator against other phone brands, saw total sales grow by 64 percent annually to hit 4 million RMB, $585 million. Xiaomi has only recently begun to focus this division on markets outside of China, which accounts for the bulk of its 206.9 million monthly active users. That’s a figure that Xiaomi said it up on 146 million one year ago.

Look more broadly at its globalization strategy, 36 percent of Xiaomi’s revenue for the quarter came from outside of China, which the firm said represents 151 percent year growth year-on-year. That’s predominantly from India, but Xiaomin said it has seen progress in Indonesia, Southeast Asia’s largest economy, while it also recently expanded into Europe.

In India, the firm is shooting for additional growth after it released the first device from its new Pocophone sub-brand. The Poco F1 is designed to offer high-end specs at just a snip of the cost, zooming in on a market segment that fellow Chinese outfit OnePlus has seen much success within in India.

The F1 is priced below $500 and it’ll debut in India before going on sale in Hong Kong, France and Indonesia later this month.