According to a report by the American Cancer Society, an estimatedÂ 266,120 women will be newly diagnosed with breast cancer in the United States this year and (according to a 2016 estimate) can expect to pay between $60,000 and $134,000 on average for treatment and care. But, after hundreds of thousands of dollars and non-quantifiable emotional stress for them and their families, the American Cancer Society still estimates 40,920 women will lose their battle to the disease this year.

Worldwide, roughly 1.7 million women will be diagnosed with the disease yearly, according to a 2012 estimate by The World Cancer Research Fund International.

While these numbers are stark, they do little to fully capture just how devastating a breast cancer diagnosis is for women and their loved ones. This is a feeling that Higia Technologies‘ co-founder and CEO JuliÃ¡n RÃ­os CantÃº is unfortunately very familiar with.

“My mom is a two-time breast cancer survivor,”Â CantÃº told TechCrunch. “The first time she was diagnosed I was eight years old.”

CantÃº says that his mother’s second diagnosis was originally missed through standard screenings because her high breast density obscured the tumors from the X-ray. As a result, she lost both of her breasts, but has since fully recovered.

“At that moment I realized that if that was the case for a woman with private insurance and a prevention mindset, then for most women in developing countries, like Mexico where we’re from, the outcome could’ve not been a mastectomy but death,” saidÂ CantÃº.

Following his mother’s experience,Â CantÃº resolved to develop a way to improve the value of women’s lives and support them in identifying breast abnormalities and cancers early in order to ensure the highest likelihood of survival.

To do this, at the age of 18Â CantÃº designed EVA — a bio-sensing bra insert that uses thermal sensing and artificial intelligence to identify abnormal temperatures in the breast that can correlate to tumor growth.Â CantÃº says that EVA is not only an easy tool for self-screening but also fills in gaps in current screening technology.

Today, women have fairly limited options when it comes to breast cancer screening. They can opt for a breast ultrasound (which has lower specificity than other options), or a breast MRI (which has higher associated costs), but the standard option is a yearly or bi-yearly mammogram for women 45 and older. This method requires a visit to a doctor, manual manipulation of the breasts by a technologist and exposure to low-levels of radiation for an X-ray scan of the breast tissue.

“We need to identify a real-world solution to diagnosing breast cancer earlier,” said Dr. Kaszynski. “It’s always a trade-off when we’re talking about mammography because you have the radiation exposure, discomfort and anxiety in regards to exposing yourself to a third-party.”

Dr. Kaszynski continued to say that these yearly or bi-yearly mammograms also leave a gap in care in which interval cancers — cancers that begin to take hold between screenings — have time to grow unhindered. 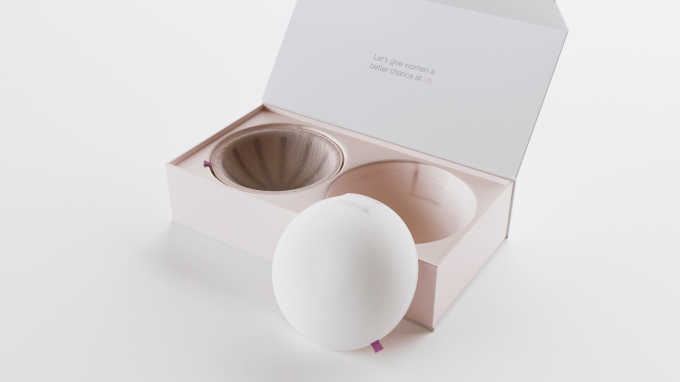 Through its use of non-invasive, thermal sensors EVA is able to collect thermal data from a variety of breast densities that can enable women of all ages to more easily (and more frequently) perform breast examinations.

Here’s how it works:

To start, the user inserts the thermal sensing cups (which come in three standard sizes ranging from A-D) into a sports bra, open EVA’s associated EVA Health App, follow the instructions and wait for 60 minutes while the cup collects thermal data. From there, EVA will send the data via Bluetooth to the app and an AI will analyze the results to provide the user with an evaluation. If EVA believes the user may have an abnormality that puts them at risk, the app will recommend follow-up steps for further screening with a healthcare professional.

While sacrificing your personal health data to the whims of an AI might seem like a scary (and dangerous, if the device were to be hacked) idea to some,Â CantÃº says Higia Technologies has taken steps to protect its users’ data, including advanced encryption of its server and a HIPAA-compliant privacy infrastructure.

So far, EVA has undergone clinical trials in Mexico, and through these trials has seenÂ 87.9 percent sensibility and 81.7 percent specificity from the device. In Mexico, the company has already sold 5,000 devices and plans to begin shipping the first several hundred by October of this year.

And the momentum for EVA is only increasing. In 2017, CantÃº was awarded Mexico’s Presidential Medal for Science and Technology and so far this year Higia Technologies has won first place in the SXSW’s International Pitch Competition, been named one of “30 Most Promising Businesses of 2018” by Forbes Magazine Mexico and this summer received a $120,000 investment from Y Combinator.

Moving forward, the company is looking to enter the U.S. market and has plans to begin clinical trials with Stanford Medicine X in October 2018 that should run for about a year. Following these trials, Dr. Kaszynski says that Higia Technologies will continue the process of seeking FDA approval to sell the inserts first as a medical device, accessible at a doctor’s office, and then as a device that users can have at home.

The final pricing for the device is still being decided, butÂ CantÃº says he wants the product to be as affordable and accessible as possible so it can be the first choice for women in developing countries where preventative cancer screening is desperately needed.